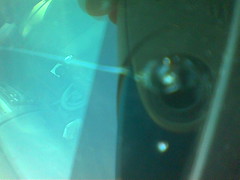 So windscreen number four is about to be replaced, taking the average windscreen life on the Focus down to about six months.

Much to my annoyance it happened on the same stretch of road as the previous impact â€“ the B3349 between Alton and Odiham, and the same cause, loose chippings from the centre line. Hampshire County Council use a technique called â€˜surface dressingâ€™ to extend the life of their roads. In the past the technique would only be used on low speed side roads, but now Hampshire are using it even on national speed limit roads. They also try to minimise disruption by not closing the road when they do the work.

The general principle is that they lay a layer of tar, and then cover it in copious amounts of loose chippings; they then let normal traffic back onto the road, the idea being that the traffic embeds the chippings into the road surface. A few days later they then take a road sweeper truck out to clear the remains of the chippings. 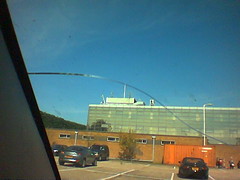 The big problem with this particular stretch of road is that it is windy and fairly narrow, and most of the traffic is going at 60mph, as a result the sweeper truck has cleared loose chippings from either lane, but not from the centre, as with the road open it was never safe for the truck to drive down the middle of the road. As a result, whenever someone overtakes, as the Audi in front of me did this morning, there are still loose chippings down the middle of the road that lift. This morning it happened that one of the chippings lifted and hit the edge of the windscreen, and for the rest of the journey to work I could hear, and see a crack growing on the edge of the windscreen. Anyway, RAC Autowindscreens are coming out tomorrow morning to replace the glass. It will still cost me a Â£60 excess, but thankfully, as it is only a windscreen, my no claims bonus is in tact.