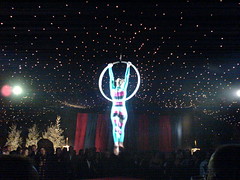 The school has always tried to do something different, so in previous years we have been to dinners held at a local golf club, a hotel in Reading, and last year, on a boat traveling up and down the Thames.

However this year has to be the most spectacular. They managed to get tickets for what is regarded as one of the hottest Christmas parties, Cirque Noel organised by The Christmas Company. The company has taken over what is essentially a field behind Easthampstead Park near Bracknell, and on it have put up a complex of tents in which the event is put on for up to 1100 guests a night. The event has been running since 25th November, and the last show is on Friday. Some friends of ours went along to one of the earlier evenings, and came back saying how great it was, and we actually know of one couple who had tried to get hold of tickets, but couldn’t because the minimum booking is for eight people.

We have to agree, that it was a spectacular show, and aside from the flex in the floor, you really didn’t know that you were in a field near Bracknell – with an outside temperature of below freezing! On arrival, everybody gathers in the bar area, which has two bars, and a small stage in the middle, where the performers do small scale acts. However at 8:15, to the strains of Also Sprach Zarathustra, the curtains pull back to reveal the 1100 seater arena, with a large stage in the centre, and 100 tables laid for the four course dinner.

The dinner was superb. We’ve been to several large scale Christmas dinners where the food has been pretty poor, the excuse being the numbers. But here they served all 1100, serving table by table – every person on the table simultaneously, a four course meal. The food was hot, not lukewarm, and was properly, and nicely cooked with crisp veg, and tasty meat. The puddings were superb as well, with a choice of a chocolate pyramid, or a winter fruit pudding. I didn’t count quite how many staff they had working, but there seemed to be at least three teams of ten waiters serving, plus a number of wine waiters serving drinks. Quite simply they proved that it is possible to efficiently serve a large number of people at something like this, and with good food too. 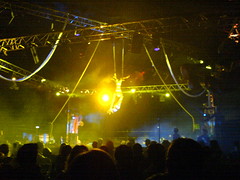 Alongside this there was the spectacular show, with the breaks between courses filled with a spectacular selection of acrobatics. This culminated in a final show after dinner, where all the performers appeared on stage, leading into the disco that continued on into the night.

Once dinner had finished, they then opened fairground attractions including dodgems, and casino tables in the bar area. Considering how much was laid on, the price was not exactly unreasonable – we paid Â£40 each. In fact the only criticism that we would have, and it is one that we’ve heard from almost everybody else we know who has gone along, is that they didn’t have a smoking policy. As is quite common now, the number of people actually smoking was relatively small, and whilst we were lucky, and were in a relatively smoke free part of the arena, others we know got stuck next to tables with people that essentially smoked all the way through dinner, which for them really spoiled the enjoyment of the evening. Although as always with such events, it is a difficult situation to call, previous dinners we have attended have restricted smoking to the bar area, at least until after people had finished eating.

Anyway, aside from that, we thought it was a great night – hopefully the school will be able to get tickets for next years event. I managed to take a load of pictures, which you can see in our photo gallery.