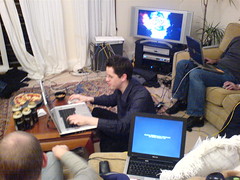 So last night I went down to Howard’s place in Winchester for another evening of games.

This time we had quite a few guest appearances over and above the usual suspects of Chris, Phil and Fuller. Firstly, Chris brought along Shaun, who unfortunately turned out to be rather better at the games than the rest of us – however he was saved by the fact that he also provided a number of laptops for the occasion. We were also joined by Martin, who came down by train for the occasion. Last but not least, Jarrod was let back into the country once again, complete with an American plug on his laptop and a stack of adapter plugs!

Interestingly this was the first time I had actually met Jarrod – he was described to me as like Chris, but turned up a couple of notches, which seems pretty accurate!

As usual, the first hour or two was spent making sure everybody had the same set of game files for the various games, fiddling with the network, and looking at Howards new TV – sorry, large computer display monitor – which with it’s HDTV input produces some pretty stunning pictures when given some of the HD trailers from Apple.

Anyway, I did take a few pictures during the night, which you can browse through in our photo gallery.