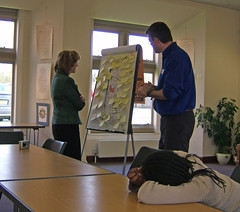 Over the past few days there have been a series of consultations going on at Diocesan House in Oxford as to what members of the Diocese would like to see in a new Bishop of Oxford. The group of people included advisors to both Tony Blair, and to the Archbishops of Canterbury and York on appointments. I have to say that my knowledge of the process comes from the episode of Yes Prime Minister where Jim Hacker has to pick a new Bishop and is presented with two choices from which to select the person to recommend to the Queen, so it was interesting to see a bit more of the process.

I’m not sure whether this happened twenty years ago when the last Bishop of Oxford was appointed, but this time, Ian MacDonald brought together a panel of young people from around the Diocese, including three young people from St James, to bring together a list of qualities they thought were required, and present it to the advisors. It was planned that it would only be Beth who would take them up, but thanks to my course finishing early to allow some of the foreign attendees to catch a 6:30pm flight, I was able to dash up to Oxford for the end of the process.

When I got there the group was talking about what being a bishop actually involved, before moving on to coming up with the list of the qualities that they thought the new Bishop should have. Ian then put together the list on a flip chart with post-it notes containing all the suggestions to present to the advisors.

To some extent, the impression that I’ve got of the whole process, is that it is pretty much like the process of picking a new vicar, but on a larger scale. Much more than with the discussions over a new vicar, it’s a process that makes it pretty apparent what a diverse bunch the Church of England actually is. Whilst in a parish you’d often expect for there to be some general agreement within a congregation (although you’d be surprised what a range of opinions come out in the discussions for a new vicar), at a Diocesan level, with over eight hundred different congregations, and with very broad range of opinions encompassing everything from the evangelical and charismatic churches, through to anglo-catholics and traditional prayer book congregations, the process is nigh on impossible to come up with someone who will please everybody.

The same is true of the youth, as we discovered when the young people from our Church had pretty heated debates at school with the young people from Arborfield and Barkham churches over the whole Jeffrey John affair. This was also shown by the combined list of requirements from today, which included wanting someone who was forward looking, willing to step outside their comfort zone, modern, but then also included a request for a traditionalist who liked hymns. As always with youth discussion groups the protocol for leaders was to try to act as enablers for the young people to put forward ideas, rather than put in your own. There were certainly situations where I really wanted to put a lot more to the discussion, particularly when one of he young people threw in ‘Not a Liberal’ as a suggestion for the new Bishop, and backed it up by saying that he felt that all the Christians you see and hear in the media are liberals. I did throw in a comment to the effect that many people believed the reverse, which was to some extent backed up later on when we were in with the advisor when one of the other young people said how much she objected to the campaigning that went on over the production of Jerry Springer: The Opera. Having said that, there were definite themes of listening to, and valuing the input from the youth of the Church which came from all sides, and certainly the message that the new Bishop needs to try to connect with the youth of the Church, came through very clearly.

Actually, some of the suggestions did remind me of a couple of paragraphs in a Grove Booklet discussing choosing a new vicar which cautioned over being very careful over the use of language – certainly some of the terms that the booklet suggests will unintentionally mean something rather different to one Christian than another did come up – however both Ian and the advisor were careful to ensure that the young people further explained what they meant by their suggestions.

All in all we were really proud of the young people we took along. Whilst some of the other young people seemed pretty much in awe of the situation when we were in seeing the advisor to the Archbishops (for some reason the advisor to Tony Blair didn’t come in – a pity since one of the other young people said that they wanted someone who would own up to mistakes, and not be like the politicians in the government) the young people we took along seemed to really take it in their stride, and were able to talk the advisor about their points very well. The feedback from them was good too, with them saying that they really enjoyed the afternoon, and really felt like their opinions were valued and being listened to.

It certainly seemed a valuable experience for everybody, as the advisor seemed impressed too. The picture above is of her being shown the list on the flip chart by Ian, and she looked through and picked out a number of them to talk to the young people about. She also wanted to take the sheet away with her, and Beth overheard her when she was showing it to some of the diocesan staff saying how impressed she was, and how she thought that she might well bring the sheet along to be discussed by the whole appointments committee when they meet in June and July.

In terms of what happens now, the advisor also explained to all of us what happens during the rest of the process. As I mentioned above, the committee will meet in June, and again in July to try and bring together the results of these consultations into a recommendation. Then, probably in September, once everybody is back from summer holidays, the two names will go to the Prime Minister for a decision to be made, at which point whoever is selected by the Prime Minister will be offered the post. As the advisor said, being Bishop of Oxford is a big job, so there may be some time then before whoever is offered it decides to accept, so we are certainly looking more towards the end of the year before we find out who our new Bishop will be.

Finally, just a couple of interesting suggestions that came up on the list. The first, was from one of our young people would have made Rev Sheila proud – that the new Bishop should be a woman. Whilst it had already been discussed in the group that with the current legislation it wasn’t possible, with a group of adults, it probably wouldn’t have been mentioned. However within a group of young people, it was suggested anyway, and it remained on the list that went to the advisor, and she was pretty apologetic that it couldn’t be a woman. She also added that in the Oxford Diocese we have one of the highest proportions of women clergy in the Church of England. The other suggestion the young people voted to remove, although it gave us all a good laugh when it was suggested. One of the young people put in that the new Bishop must sing in the shower – I never did quite find out whether this was as a way to tell if they would be good at singing hymns or something else. However, for the image of an illustrious panel having to ask candidates for the Bishop of Oxford whether they sing in the shower was priceless.

One thought on “Bishop of Oxford – Youth Consultation”