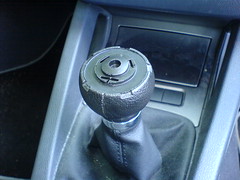 For the next week, our Golf is going to be going topless â€“ at least in terms of the gear stick. The silver and black plastic top that has the gearbox layout on the top has broken, and as of this morning my repair jobs with superglue gave out again so I gave our local VW dealer, Ridgeway VW a call.

The top actually broke last weekend, when Beth was driving the car, she shifted into fourth and it just came off in her hand. Looking at it, the top is held in place by three different sized tabs â€“ to ensure it always fits on the right way up I assume â€“ and two of those had snapped. Looking at the breakage pattern on the plastic the two broken tabs had been cracked already, so it is not surprising that it snapped. I did an initial patch-up job with some superglue, but this lasted for a couple of days before it broke again. The problem seems to be that although you can change gear normally without applying pressure to the top, to put the car into reverse you have to apply pressure to the top of the gear stick to shift into reverse, and it is this is putting the strain on the plastic tabs. 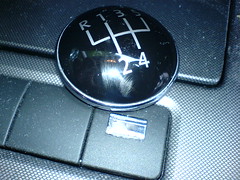 Anyway, my patch jobs were put paid to as a result of getting the broken tabs out of the top of the gear stick. The plastic of the top is relatively soft and flexible, so it is quite easy with a small blade to prise the broken tabs out, unfortunately on this occasion one of the tabs pinged to some hidden corner of the car to be lost for ever.

So why the wait for a week to fix it? In typical fashion, Volkswagen donâ€™t supply just the plastic top as a spare, instead they have to order in and fit a complete new gear stick â€“ taking about an hour rather than the five minutes it takes to fit a new top â€“ absolutely barmy. Having said that, as the car is still under the VW warranty itâ€™s not me that is going to be paying for it. The only annoyance is that they are having to order in the part, so I have to wait until next weekend to have it done.