On Boxing Day we had the dubious joy of experiencing Heathrow over a holiday as we headed off to visit Beth’s family for the later part of the Christmas holiday. After the fog problems a few days earlier we weren’t quite sure what to expect.

Things started pretty well with the taxi arriving early to pick us up. We made it to the airport pretty quickly, and although the large tents that accommodated delayed passengers were still there, they appeared largely empty. 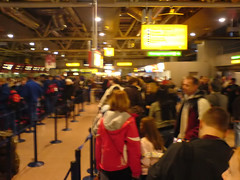 Thanks to the British Airways online check-in we’d already got our seats and boarding cards, and only needed to use the fast bag drop and head through security. Unfortunately this was the first problem, as the fast bag drop was anything but. The queue for the fast bag drop was in fact significantly longer than the queue for regular check in, but with less staff, in fact BA had to devote a number of staff to managing the increasingly unhappy queue. It wasn’t the last queue either as we had to queue again at security. Interestingly the queue wasn’t actually for the security check itself, but for a table before that where staff were ensuring that people only had one piece of carry on baggage, and that people were following the current regulations for liquids and confiscating anything that didn’t. They seemed to have had a pretty successful day in this respect as there was a very nice looking bottle of Champagne sitting amongst the confiscated bottles.

After getting through security, we decided to go and have some lunch, and picked one of the restaurants in the terminal, it was not surprisingly pretty full. Things got even less appealing when a small child on the next table to us took one bite of his pizza and was spectacularly sick all over the table.

We had booked places in one of the airport lounges in the terminal. With the ongoing moves by the airport authority to reduce the amount of seating in favour of shopping, I’ve tended to find that getting into the lounges is a good way to have some peace and quiet whilst waiting for a plane. Especially if your flight is delayed, it makes a big difference. It has to be said that the Holideck lounge in terminal 4 is one of the best I’ve been in at Heathrow. It is split over three floors, with a seating area with games and entertainment on the ground floor, a quieter seating area on the first floor, and then an observation deck with a panoramic view of the rest of the airport, including the south runway on the top. Since our flight was on time, we had little chance to enjoy the lounge, as we were quickly called to the gate.

Despite being the newest terminal, terminal 4 still struggles to accommodate all the flights it needs to, and ours was one of the flights that was parked away from the terminal building, necessitating a bus ride. However our fellow passengers were all there, and we managed to board the plane with ten minutes to spare. Unfortunately although we were efficient, Heathrow itself definitely wasn’t. As we settled into our seats, the captain came over the speakers saying that they were still waiting for approximately fifty bags that the baggage handlers had forgotten to deliver. These eventually arrived, but then the captain announced that they had still failed to bring all the bags, and had had to return to the terminal to collect the one bag they had left behind. Once they had loaded on the last bag we had now missed our slot, so had to sit around again waiting for clearance to move. That eventually came about forty-five minutes after we had originally been due to leave. But it wasn’t over yet. The ground crew disconnected the plane from the ground services, and pushed us back, and the pilot powered up the engines – however he then got a fault light from the air conditioning system, and after about ten minutes we went straight back onto the stand whilst a technical team came over from the hangar with a replacement part. The actual changeover was pretty quick. Since Heathrow is a major British Airways operation they had a full set of spares, and were able to diagnose the fault remotely before even coming over to the plane, meaning that the team only needed one visit, and fixed the problem quickly – but again we missed our slot, and ultimately ended up leaving a full ninety minutes late.

Now whilst some of the problems were unavoidable – delays caused by passengers who hadn’t looked up the current hand baggage or liquid regulations for example – a number of the problems were avoidable by better organisation at the airport. As a contrast, at the other end, despite it being Boxing Day, we got through Calgary airport in twenty minutes, with a full set of staff at passport control, and quick delivery of the baggage, not only that there was an air bridge to the plane, and we came in to the recently rebuilt D concourse at Calgary. 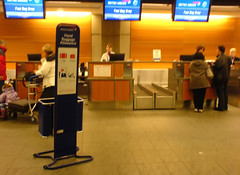 We went through the whole thing in reverse on the evening of New Years Day, taking the flight back from Calgary to Heathrow. We again used the online check-in, except this time the fast bag drop was actually fast – they had four staff at the desks – the same number that were on the desks at Heathrow on Boxing Day – the difference being that there is only one British Airways flight out per day. Security was also a lot quicker at Calgary, and the return plane was parked again at an air bridge, and left bang on time. Of course it all went to pot when we got to Heathrow. First of all we had the traditional stack coming in to Heathrow – although it has to be said that the timetable accommodates this – but again the plane was parked up away from the terminal building necessitating multiple trips by the two buses they managed to find to transport us. Having said that, even with the delay caused by having to be taken by bus, we still had to wait another twenty minutes for the baggage to appear.

To encourage the majority of passengers to check-in online to reduce queues, but then not bother to have enough staff to deal with the baggage is crazy, and of course it seems pretty fundamental to have a checked baggage system that can cope with delivering all the baggage to and from a plane in good time. I think in general though, you can see exactly why British Airways are moving to Terminal 5 when it opens, as Terminal 4 really just can’t cope – neither the baggage handling, nor the check-in facilities. However, how long will it be before Terminal 5 can’t cope with the passenger volumes?

Update: It seems like we weren’t alone in having problems with baggage at Heathrow over the holiday, apparently there are thousands of items sitting around at Heathrow, the problem being caused by the pre-Christmas travel chaos, changes in working practices, and a lack of staff. Reading the story I guess we should be glad we got our bags at all…

One thought on “Heathrow Holiday Hell”