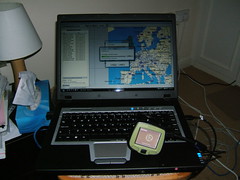 Although I’ve been running a 64-bit operating system on my laptop since new, one of the big annoyances is the general lack of support that hardware manufacturers have shown towards the 64-bit platform. As a result, I’ve had to keep a 32-bit install of Windows around for a number of tasks, one of the main ones being to keep my Garmin StreetPilot i2 up to date. To be honest, since it was such a pain keeping two Windows installs around, I haven’t much bothered.

However recently, my i2 announced that the maps were out of date, and directed me to the Garmin website where it offered me an update to the latest version of the maps – more than that, whereas the unit shipped with only UK coverage, the update would contain coverage of the whole of Europe, pretty useful for our summer holiday to France. By this point, I had updated the laptop to Vista-64, and to be honest I was expecting it not to work, but then I came across this post on the Garmin Blog on Vista Compatibility which claimed in the second half of February, Mapsource, and more importantly the USB drivers for the GPS units will be compatible with both 32-bit and 64-bit editions of XP and Vista. Checking the download area, this month, there were indeed drivers that said they were Vista compatible.

I dutifully downloaded both the latest Mapsource and Drivers, and installed them. Then when the update for the GPS arrived yesterday, I set that going. Here is where the hassle started, when at the relevant point in the City Navigator 9 install I plugged in the GPS, it refused to recognise the unit. I sent a support e-mail off to Garmin, and experimented some more. After reinstalling the Mapsource and USB drivers from the download, the unit was now recognised – however every time I tried to use the update on the DVD, it failed to recognise the unit again – it seems like despite the downloads being newer versions, the update DVD is overwriting the installed versions with it’s own versions – a bit of pain really. It’s not too much of a problem though, as I installed the map data onto my PC, and then did the map update manually – the process that is pictured above.

Aside from the annoyance with the install on the DVD, it seems to work pretty well flawlessly with Vista-64 – all from a single install too – none of this 64-bit/32-bit downloads. Certainly there are a number of other manufacturers of hardware who are still working on compatibility – Philips for example – who don’t support their SPC900NC camera on Vista at all currently – so it’s good to report that the Vista driver issues are starting to be fixed, particularly for those of using the 64-bit version.