So today, I spent the day up at the Parish Centre for our Time and Talents Day for the Conservation Appeal. I’d offered to be around to answer any computer questions people might have, so this morning I packed my laptop into the car, and headed off.

In actual fact I ended up having only one question (although another parishioner has also asked me to help them out moving data from their old PC to a new one), and most of the rest of the day I entertained myself catching up on my reading in Google Reader, and demonstrating Microsoft Train Simulator – in particular the stunning (and free) London and Port Stanley route – which it had to be said kept at least one person transfixed for almost an hour. Having said that, that was one more question than someone else who was offering advanced Excel training…

What seemed most popular were the lunches, the ironing, the reflexologist and one couple who actually did the most hard work of the day by washing and valeting cars the entire day. There are also quite a few offers of help for other times on the board still, so hopefully some of those will be taken up over the next few weeks.

The appeal itself has reached the halfway point, so we have Â£250,000 pledged or in the bank – only another Â£250,000 to go. We had another round of specialist visits during the week, and in the run up to Easter between services one group will be systematically moving pews and taking up floorboards to investigate what is underneath the floor. We’ve already had one or two interesting discoveries about the floor. Firstly, it isn’t flat – a bit of a problem for the underfloor heating – and secondly, the floor level in one particular corner is lower than the base of the wall, since this happens to be the same corner in which Beth sits most often, she is possibly considering sitting somewhere else!

The day was also the first time I had tried the laptop with Vista installed on battery power, and switching between battery and mains power. Now under XP-64, the machine had no problems, you could unplug the power supply and plug it back in without a problem. Not the case under Vista – as the machine just locked totally whenever the power type changed. Vista in general proved to live up to it’s Windows heritage, and locked the machine totally on at least two occasions during the day, and Google Reader quite impressively managed to knock over Internet Explorer on two occasions. From the experience today, Vista is quite okay for the occasional use I put it to, but the crashability of it, combined with the annoyances of the continual requests for permission to do almost anything, means that there is no danger of me switching back from the Mac. 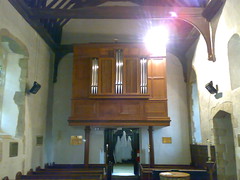 With it being quiet, the day did give me a chance to pop into the Church and take a picture of the finished organ, now that the ornamental grille has been added. Thankfully, the addition of the grille seems to have sorted out the volume problems which have been producing a number of complaints over the last few months. The reason for this is pretty simple – the way the swell box opens directs the sound into the bottom part of the grille, so the congregation is no longer getting sound waves straight from the pipes.

I’ve added the final picture to my previous set of pictures.

One thought on “Time and Talents Day”