So after a bit of discussion, we decided to head off into London to attend the 24 Hours of Flickr London event. Although it involved dashing home from work, and an hour on the train each way the prospect of seeing my picture hung on the wall, as the pictures had been at the Berlin and Paris events was just rather tempting. 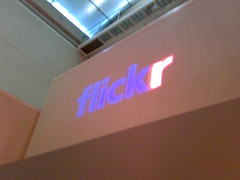 I managed to make it home from work pretty promptly, and we headed straight down to Fleet station. Thanks to some early-bird commuters heading home we even managed to get a space just beyond the reserved parking in the car park. Unfortunately things didn’t go quite so well after that. There was one person in front of me in the queue, an old gentleman buying a ticket for tomorrow morning. The reason he was doing that was because they now will not sell the reduce priced tickets on the train. If you’re lucky they’ll sell you a full price ticket – if you’re unlucky they’ll give you a penalty fare. As a result, there is now a sizeable queue at the ticket office whenever a train arrives with people buying a ticket for tomorrow. Anyway, after grumbling about this for a bit, he was then told about the other new South-West Trains policy – super off-peak fares. In actual fact what they’ve done is hiked off-peak fares towards London by 20% and introduced a new super off-peak band that comes into force at lunchtime – anyway, that produced another grumble. With all that grumbling we got our tickets just as the next train to London pulled into the opposite platform, and typically the guard closed the doors and the train pulled out just as we made it to the stairs down off the bridge. We caught the next train, and made it to the event just before 8pm.

Flickr had taken over the foyer area inside the Manton Entrance of the gallery on Atterbury Street. The reason for the choice of venue being that for the first time Tate Britain was hosting an exhibition of photography – How We Are, with photographs stretching right from the dawn of photography – right up to a PC connected to Flickr itself as the final exhibit. Alongside a selection of Flickr freebies, they were also giving away copies of the book, plus a selection of nibbles and free drinks. All very nice. The only disappointment was that the only place that 24 Hours of Flickr pictures were being shown were on a plasma screen – they didn’t appear to have the big blown up versions of the book pages that they had shown at the other events. To be honest there was nowhere that they could have shown them, but it was still a bit disappointing. 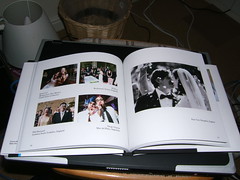 So in lieu of a gratuitous shot of me by my picture, I’ve got a shot of my picture in the book. It’s in amongst a selection of wedding pictures not surprisingly.

The rest of the book has a massive range of pictures, covering a broad spectrum of subjects. Unless you can get to the last of the events in Montreal, the book is available from blurb.com – my picture is on page 64. 😀

After a browse round the How We Are exhibit, we headed back to Waterloo and the train for home. A bit of a lightning visit – but enjoyable – even if I didn’t get to see my picture actually hung in the Tate…

Update: The posts on the event are starting to come in – check out technorati for a selection. Being a Flickr event, there are lots of pictures too, the most interesting of which includes the page with our picture on it as a result of two of the other wedding pictures being taken by different people at the same event – apparently not the only coincidence like that in the book!

Andy Piper also highlights that the guys from Moo who produce the cool little Moo MiniCards from pictures in your Flickr stream were in attendance. Beth has recently ordered a set using some of her pictures, and absolutely loves them. She actually came home with a few more, as amongst the freebies last night were a selection advertising Flickr…