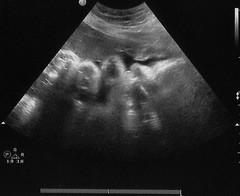 One of the worst parts of any hospital visit is the interminable waiting, and we had a pretty good example of it today when we went down to Frimley Park for Beth’s next ante-natal appointment.

They did seem pretty flustered when we arrived for our 2:45pm appointment, certainly like they had staff off. Unfortunately we had a list of people we needed to see including diabetic nurses, midwives, consultants, plus another scan, all of which had to occur in the right order, as a result we spent most of the afternoon sitting in the waiting area. Even then we weren’t done, the postscript was that once we’d finished at the clinic, we had a twenty minute wait at the pharmacy before we finally left the building at about 5:30pm.

Anyway, in terms of a news update, everything seems to be going okay. Beth has one more appointment next week, before they try to induce the baby in the week after. From what we can gather whilst they might succeed at the first attempt, they might need to try multiple times to induce the baby, so it might well be that we’ll have several days of sitting around in a different part of the hospital. Whichever way, we’re on the home stretch now with only a couple more weeks before the birth.

The picture here is the scan picture we got today. Since the baby is now pretty big, the operator can’t now get a clear picture of the whole baby, so this one is probably a lot less clear than some of the others, but the baby is lying across the picture with the head on the right. You can see a nose, and then the hand is held up in front of the face. Suffice to say in a couple of weeks we hope we’ll have some much better pictures to look at.

3 thoughts on “Waiting Around”