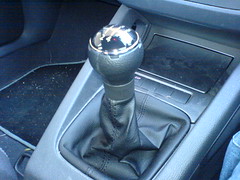 So before dawn this morning I was up and off to Ridgeway VW to have them replace the entire gear stick due to the broken bit of trim on the top. On the phone the service agent had said that the job would take about an hour, but it was best to leave an hour and a half just in case they had problems, or were busy. They had slots at 7am or 8am – not surprisingly with it being a Saturday I opted for the slightly later 8am slot!

When I arrived, there was one person already sat in the waiting area, and another car just being taken in, but aside from that it was pretty quiet. The car was moved by a technician almost immediately, so I sat down with a drink and some reading material ready for my wait.

However, barely had I finished browsing the brochure for the new Eos, and just started on an extreme level Sudoku puzzle on Sudoku Rules Extreme (usually takes me between 20 and 50 minutes to do) than the same technician was coming in to give me back my keys having done the job. When I mentioned that I had been told an hour for the job, he said that they usually leave an hour in case they have problems, but the actual job should only involve unclipping the trim and swapping over the stick. In total it took about twenty minutes to do. The only visible indication that anything has been done is that the new gear stick has a black plastic collar under the ball on the top, rather than the silvery chrome collar the old one had – not anything you’d notice unless you were looking, and certainly not anything that would affect the operation. The only reason I paid any attention to it was because they explicitly asked for the old broken top, and with the speed of the changeover compared to the estimate I was wondering whether they’d patched up the old one!