I’ve just filled up the car for the first time since changing jobs. Looking at the usage aside from the trip to Abingdon on Friday it has been three weeks of commuting every day, and the usual mix of local running around for domestic duties like shopping, Church and so on. When I was working for SSE, the similar mix of commuting and local domestic duties required a fill up every week. (Also worth considering that with the current price of fuel around here, a fill up usually costs over Â£40.) So looking at the result of the move in purely fuel costs, I’ve saved about two-thirds.

Of course, if you bear in mind that the new journey is only a tenth of the distance from home than SSE, you realise that the car is running considerably less efficiently than before, and this is reflected in the MPG figures that I got over the last three weeks. Usually, during the winter months with the winter blend diesel and colder temperatures the Golf does between 46 and 48 miles per gallon (it rises to between 48 and 50 miles per gallon in the summer), however over the past three weeks the Golf averaged 38 miles per gallon. It is worth bearing in mind when looking at that figure that it is still better than the Focus ever managed on the trips down to SSE, where it averaged around 34 miles per gallon…

The Volkswagen dealer fixed the problem with the indicator light under warranty today. When I collected the car at lunchtime (sadly not cleaned this time) the service assistant said that it was pretty unlikely to have been a bulb, but they had to let me know that it could be a chargeable item if it was. In this case they replaced the whole indicator module.

Now the only mystery to solve is quite how the radio keeps retuning itself to 210FM whenever the car goes in to the dealer. Do they have a deal with the radio station or something? 😉 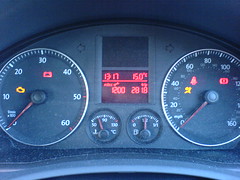 Whilst my experience with the Golf has been a lot less annoying than the Focus, with an engine that doesn’t misfire, works absolutely fine on the regular fuel, and a windscreen that can survive a stone chip without cracking, there is one thing that is starting to get annoying, the variable service intervals.

The theory is great – the car with it’s specially developped oil needs an oil change less frequently, so on board sensors will monitor your usage and driving style, and also the oil quality, and then at some point between 9000 and 20,000 miles will request a service. It is beneficial for people who use the car for primarily long trips, rather than lots of short hops that don’t give the car a chance to warm up, so sounds ideal for someone like me whose main use is for trips to work, 44 miles away. However the practice is a bit different. The car has just announced that it needs a service in 1200 miles, with the mileage on about 25,000. Not too bad until you realise that this is the third time it has done so. The first time the garage just reset the indicator, but right on cue, at the minimum interval level, it came on again – when they did the first service and reset it, and here we are after the minimum mileage again, with it asking for a service. Incidentally, after the mileage, it then gives you a number of days before the next service – in this case 238 – 8 months time!

My assumption is that when I phone the dealer tomorrow, they’ll just ask me to bring it in, and they’ll reset the interval again, the assumption being that it is a problem with a sensor. The question that bothers me is what if it isn’t a sensor, and this is just a symptom of something bigger? (Of course maybe that is because I watched a documentary about the Columbia crash yesterday, where they did exactly the same thing – assumed that an unexpected reported fault was a faulty sensor….)

Update: Chatting to a friend who owns a Seat with the same engine today, he said his service indicator does exactly the same, and his dealer has just told him to ignore it and bring it in on a regular fixed length service interval!