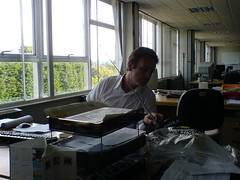 One of the results of my employers dabbling with the Fish Philosophy was a somewhat more relaxed attitude, which in part has led to staff being allowed to listen to music whilst working. As a result, a look down our floor on any normal day would find quite a few staff wearing the tell-tale white headphones of an iPod or one of it’s clones.

However over the past few weeks, various people have been coming in with some mighty big and strange looking iPod’s. Here we see Andy trying to tune his to the ‘Long Wave’.

Of course, it’s all down to a certain game of cricket taking place at the Oval, where England have the chance to regain a small urn containing the ashes of burnt bails said to symbolise the ‘ashes of English Cricket’ following a defeat by Australia at the Oval in 1882. For the first time in many years, England have a real chance of regaining The Ashes, and it all hinges on the final game over the next few days.

However, the problem that most people have discovered, is that all these new fangled modern radios, only pick up stations in the FM band. The ball by ball cricket commentary is broadcast on BBC Radio 4, but in order not to annoy non-cricket loving listeners, for the duration of the matches, there are two BBC Radio 4’s. The FM one has normal programming, whilst the cricket goes out on the old long wave frequency. As a result, the new fangled mini-radios on phones, and some of the media players just can’t pick it up, so a range of odd looking devices have been brought in, including Andy with a radio that looked very similar to the one that my Grandmother had in her kitchen when I was a child, and whilst now with RDS you can just select Radio 4, here you can see him trying to tune in…