As usual, the Geek Dinner on Saturday has a broad selection of reports from a number of different sources. I thought I’d highlight some of the postings that caught my eye.

Firstly, Robert Scoble himself posted about the dinner on Sunday morning, linking here – which has certainly given my traffic a boost over the past couple of days, and left me quite chuffed to be picked out. He also linked off to a stack of pictures taken by Tim Scarfe.

Dave, nursing a hangover it seems, blogged pretty quickly about his experiences – and it was he that pointed out the link from Scobleizer.

Jen and Neil Dixon of Britcaster.com have several blog postings on the dinner, including this one which includes a picture of me photographing Dave’s nipples… 😮 As an aside, Dave pointed out that Jen and Neil have a story similar to Beth and myself, with them having had a long distance relationship over e-mail before Jen moved across the pond and settled in the UK.

It is worth remembering that it wasn’t only geeks that attended the dinner. Probably the most interesting posting on the event was from Andrew Denny, who blogs on the subject of canals over at GrannyButtons.com, and has an interesting angle on the evening, especially his description of Scoble at the dinner. 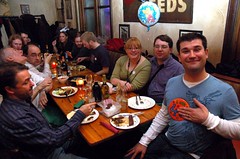 He also took a great series of pictures of the evening. Having done a tour of all the tables during the dinner, he does have a picture of us, with a caption that gave me a laugh when I read it – Celebrating your 40+ birthday at Geek Dinner – all of Sarah and Barry’s hard work arranging the surprises for Dave was worth it as now nobody believes he’s only 35!!!

Looking at the slightly more controversial aspects – Ben Metcalfe, who has previously been pretty critical of Hugh McLeod and Stormhoek on his blog mentions in a longer post about current issues a conversation which he had with Jason Korman of Stormhoek (no mention of it in the Stormhoek blog posting though), which includes the following comment:

I came away from that conversation with the impression that Jason (a self-described â€œwine entrepreneurâ€?) had no real threshold above which he wouldnâ€™t consider marketing his wine (other than legality, Iâ€™m sure).

Having chatted to the Stormhoek guys at one point in the evening we didn’t get that impression – certainly we didn’t feel like it was any sort of sales pitch. I have come across salesmen before who really never switch off looking for a pitch, but that certainly wasn’t the impression I got.

Anyway, all in all it was a great evening, and I’m sure we’ll put in an appearance at another dinner soon!