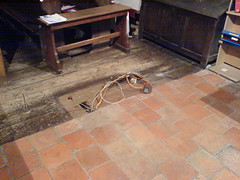 So tonight after choir practice I took a look at the current state of work on the removal of the organ.

Things have moved on a lot since Monday. Now in the place where the console has stood for decades is just a hole in the floor with a few wires trailing out, and the shadow on the floor where it once stood. In it’s place is our replacement organ, lent to us by the organ builders, an electronic organ a good deal younger than the Compton going off for repair. 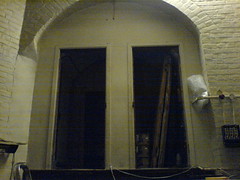 Today there was a lot more to see at the other end, as the door to the vestry had been removed, and the vestry itself were a number of ladders and platforms to give the two man team access to the organ itself. The instrument is almost totally enclosed by a wood panelled box, which I assume was added around the organ after it had been built. However this solid panelling poses a problem for removal as the only access is now from the back, through two small doors above the vestry door. This is what makes the whole job take so long, as with the minimal room inside the organ, each pipe has to be carefully removed. 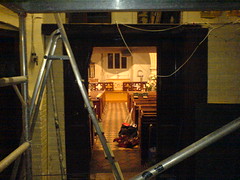 Further down the church is more evidence of work, as various planks of wood are laid out across the tops of the pews, where the pipes are placed after they have been removed. From there they get taken to the organ builders van ready to be transported back down to Kent.

Currently the hope is that we will get the Compton returned in time for Easter, but that is definitely more a hope than a definite, hence why the organ builders have provided us with a loan organ. Ultimately the big date that has to be achieved is July, as we have the bishop coming along then to re-dedicate the organ, and we can’t very well re-dedicate it if it isn’t there!