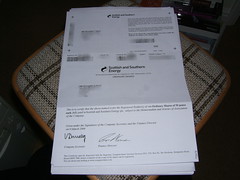 One of the negative aspects of leaving SSE was that I passed up on both their Sharesave scheme – which would have been pretty lucrative thanks to the soaring share price. However, I took the decision that I’d rather make the move, as effectively there would never be a good time to move if you considered the scheme.

What I’d forgotten about was the fifty free shares that they gave to me and every other employee last year as a bonus. To some extent I hadn’t paid that much attention, as when you read the small print of the offer, the shares were held in trust for three years, and if you left within that time, then you wouldn’t get the shares. So when I got a letter from the company that handles the SSE employee share schemes, I assumed it was just a letter letting me know that I had lost the shares.

This is to certify that the above-named is/are the Registered Holder(s) of one Ordinary Shares of 50 pence each fully paid in Scottish and Southern Energy plc, subject to the Memorandum and Articles of Association of the Company

I’ve just been on to the website to double check, the fifty free shares account has been cleared out as expected, but the certificate is exactly right – I’ve got a single share in the company, added on 9th March, that as of today is worth Â£11.47!

So is it a parting gift from SSE – or just a Computershare screw up? My betting is that it is the latter, as they also messed up the share schemes for a couple of colleagues at SSE when they took over the schemes last year. I’m half expecting to receive a letter in a few days taking my share back again, however for the moment, I guess I’ll just keep it as a souvenir. But for the moment it does look like I’m a fully legal shareholder of SSE.