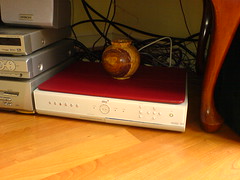 It’s surprising how quickly we’ve got used to having the Sky+ around. Certainly we’ve recorded a lot more stuff than we ever did before, mainly because it is so easy to do. We’ve also programmed in the programmes we watch regularly using the series link feature, which, combined with the ability to watch a programme from the beginning whilst it is still recording has allowed me to forget that a programme has started without missing anything! We’ve also made pretty extensive use of it on evenings like the current Saturday nights where both Strictly Dance Fever and Doctor Who which air one after the other on BBC1, and both have companion shows that directly follow the main programme on BBC3. Time wise we’re able to watch both Strictly Dance Fever and Doctor Who and their companion shows, and then the Strictly Dance Fever results show.

Having said that, programming a sequence of recordings as we have done on a Saturday does highlight some of the limitations of the box. Firstly, by default the box adds some extra minutes to the beginning and end of a recording, however it doesn’t take these into account when looking for clashes. The box has two satellite decoders, so if one programme finishes at 10pm on one channel, and another begins on a second channel at 10pm, the box will use the two decoders to put the extra time on each recording. This is fine unless you’re taking advantage of the feature that allows you to record two programmes simultaneously, as the software doesn’t highlight that the changeover at 10pm can’t be performed if a second programme is being recorded. Indeed, it doesn’t spot the problem until it tries to do it, at which point you get a message pop up on screen asking whoever is watching at the time to choose! What is slightly more annoying is that it seems to not be clever enough to spot when adjacent recordings are on the same channel, for example the arrangement we have on a Saturday night with recording successive programmes on both BBC1 and BBC3 usually produces a warning that one of the programmes has only been partly recorded, implying that it is trying to use both decoders to overlap the recording of successive programmes on a single channel, rather than being able to record the same channel to two separate recordings.

Despite the annoyances, it still is a great purchase, and a lot more flexible than the humble video recorder. It’s popularity is certainly indicated by the decision by Sky to only supply Sky+ boxes for their new High Definition service Sky HD.

One thought on “Getting Used to Sky+”