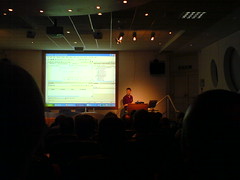 I’ve just got back from attending the third Developer Day, held once again at the Microsoft Campus near Reading. Aside from Dave and Sarah, most of the usual suspects were around. Also, after initially being told that there wouldn’t be very many people from SSE coming up, most of my old team from there came along too, alongside a colleague from my current employer. What is interesting is that I had a couple of conversations with people purely on the basis that they’d seen me at previous events, whether that be geek dinners or previous developer days. With regards to the Geek Dinner, Beth and myself decided to drop out of that. We’re currently in the midst of a busy run of weekends, so as numbers were limited for the dinner, and we could do with a Saturday night to ourselves, we took our names off the list.

Anyway, onto the sessions. I went to a bit of a mixed bag, some like Oliver Sturm’s session on ‘Designing a Model Based Application Architecture’ were more useful for current work, whereas others such as Tim Scarfe talking about the Windows Presentation Foundation, or Robert Hogg talking about LINQ were sessions about technologies that are coming in the next few years – which I would say for most established projects won’t get used in anger for a long while, bearing in mind that like many, we have large numbers of customer systems in VB6, products still build in Visual C++ 6, and any .NET is currently in Visual Studio 2003 and framework 1.1.

As usual, there were the usual selection of hiccups with presentations, and problems with equipment. Tim Scarfe especially had a nightmare with the early part of his presentation, with trouble with the screen mirroring functionality on his laptop, followed by a whole series of speed issues with both showing video clips and his actual demonstration. It is interesting to note the variations in how people used their laptops this time, with some trying to run Visual Studio and Powerpoint simultaneously (although I didn’t see anyone using the presenter mode – everybody still just mirrors their laptop screen providing some somewhat stretched layouts on the big screen with the latest widescreen layouts). However Oliver Sturm was using VMWare to keep his presentation separate from his development demonstration, which of course ensures that if the development demo crashes (which it didn’t), it shouldn’t take the slides along too! It was also great to see a number of presenters making use of the code snippet functionality in Visual Studio to show code demonstrations, getting over the frankly tedious moments in previous events where you sit and watch somebody type their code in and debug it live on stage.

Probably the most interesting presentations from my point of view were the future technologies. The language and syntax enhancements brought along as part of LINQ look very interesting and useful, although perhaps the one that made me sit up and be really impressed was the power of the Windows Presentation Foundation. It is worth adding that a number of the ideas that although new on Windows, resonated with ideas in Quartz in MacOS X, however it seems to lift the bar somewhat, and certainly the demo was pretty impressive. Of course I fully expect MacOS X will catch up and overtake again, just as Windows will try and overtake again – such is the computer industry. The other good thing about the demo was that although Tim showed us cool stuff such as flying buttons and pulling pictures off Flickr, equally you could see features that would make a difference to those of us building much more business oriented applications.

All in all it was definitely a worthwhile way to spend a Saturday, and I’m certainly going to be signing up to day number 4 when it is announced.

One thought on “Developer Day 3”