Hopefully this won’t be the start of a Golf grumbles category, to go with the category full of Focus grumbles, but the Golf has developed a bit of a fault. Currently it’s at the annoying stage, the kind of thing that I won’t take it in to the dealer for specially, but will get them to look at the next time it’s in for a service. 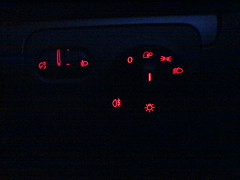 The fault is easiest to see in the pair of pictures here, and is with the dashboard lighting. The Golf has a system whereby when the car is unlocked, if the ambient light level is low it will switch on the headlights and internal lights automatically. It will also illuminate the dashboard in the normal night mode as if the headlights were turned on manually.

However, on Saturday night, it did all this, and just as I started the car, suddenly the dashboard behind the headlight controls, and on the central panel containing the courtesy lights switched back to day mode, whereby only the headlight switch is illuminated, with the automatic mode highlighted in green. Having said that, it didn’t seem to make any difference to the operation of any of the controls, or the car, so I drove home with it like that, and when we got home, took a look at the problem. 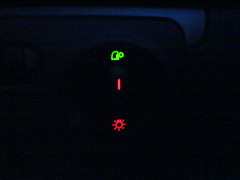 Having said that, when I got home and turned everything off, and repeated the same process it worked fine. I put it down as a temporary glitch, and went to bed. However, last night it did the same thing again. This time I tried a number of techniques to try and solve the problem. Restarting the car didn’t seem to solve it – the illumination would start up correct, and then change back to the single green light. Ultimately the problem just seemed to go away – after a couple of goes turning the headlights off and back on, it just seemed to stay in the right mode. Indeed, when it subsequently did it this morning, it seemed that the problem goes away after a couple of minutes – however you have to turn the lights on and off to get it to go, it’s just that it doesn’t come back after the car has been running for a bit.