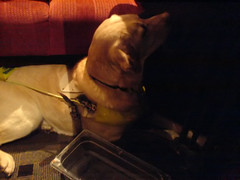 So we’ve just got home from the end of a decidedly busy weekend, as the various Christmas engagements got into full swing.

We started off straight from work on Friday night with the school play at Beth’s school, preceded by a dinner with colleagues from the English department at the Blubeckers restaurant in Twyford – the Horse and Groom pub as was. If you’re wondering why the picture of a dog at this point, I should explain that one of Beth’s fellow teachers is blind, and so we were also joined by Yasmin her guide dog. I was sat at the same end of the table under which Yasmin was sitting, and had to contend with various pitiful looks from her as she waited for us to drop something tasty. Having said that, she did get waiter served too, as she got some dry dog food at the same time, so needed some water – and the waiter came back with a little jug and a cloth and prepared her food too! I’ve not had much experience of going to restaurants and the like with a Guide Dog, but it certainly seemed like they went out of their way to be helpful.

The choice of play this year was Peter Pan, and thinking about it, this is probably the first time we’ve seen the whole production on stage. Being a school production the flying didn’t involve wires, instead there were a number of actors dressed primarily in black who lifted various of the cast members as required. Perhaps the most surprising thing was the number of elements of the play that might be considered a bit strange. For example the play has a very clear idea of the role of women, with Wendy being made the mother for the Lost Boys, and subsequently Wendy, her daughter, and female descendants being taken back annually to Neverland to spring clean for Peter. The other point that produced a somewhat surprised reaction is the first time that Tinkerbell demonstrates her ill manners and behaviour by referring to Peter as â€œyou silly assâ€? – not something people expect in a piece of classic children’s literature! All in all it was a pretty impressive production, and certainly there seems to be a good deal of acting talent in the school. 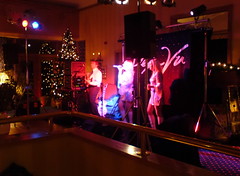 Last night we had our first experience of Christmas with my new company. Thinking about it, I haven’t been to a full blown office Christmas bash like this for a good few years. Hi-Q used to hold a company dinner that included spouses in the spring, apparently because most places tend to hike the prices around Christmas. At Christmas itself the employees used to be taken across the road to the local free house, who would lay on a Christmas lunch for everybody. SSE, being a somewhat larger organisation didn’t try and bring the entire company together for a party. Instead they gave each employee an allowance for a Christmas party, which in the case of my teams usually ended up being a meal of some kind – last years being a visit to a local curry house. The party organised by my new place was a private party at the nearby Bearwood Lakes Golf Course, complete with live music from ‘Deja Vu’ a covers band who did a range of music from the fifties to the present day.

Probably the best thing from my point of view was the food, which was excellent. On previous occasions with Beth’s school we’ve been along to similar Christmas parties at big hotels in Reading, and equivalent events at other local golf clubs, and quite often the standard of food has been pretty poor, with decidedly rubbery turkey and overdone vegetables. This one was definitely on a par with the great food we had last year at Cirque Noel. Typically various people in the company had been drinking in the local pub since early afternoon, so were decidedly merry before the free champagne and wine got going. The music was okay, but I’m thinking that I must be getting old, as my first thought was that it was too loud… It also didn’t help that since I’ve been keeping a cold at bay for the past couple of weeks that in the hot atmosphere, with the waft of cigarette smoke from the bar area didn’t exactly do much for my breathing, so we didn’t dance all that much, despite the increasingly annoying attempts at persuasion from my MD. It was interesting to note though that about half the company actually made their excuses pretty early on once dinner had finished, so that perhaps is why he was keen to get everybody that was there up and dancing. Personally, although I quite enjoyed the evening, I think that the Hi-Q idea worked better, and in terms of value for money probably wins out as well. 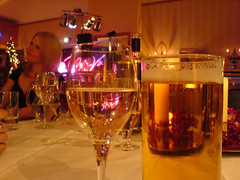 Taking it relatively carefully at the Christmas party ensured that I still had a reasonable voice left for Sunday. With Christmas Day being a Monday this year, we’re holding the Nine Lessons and Carols service a week early on the third Sunday of Advent, rather than the fourth, which gets combined with Christmas Eve. As a result in service terms this was our one quiet week, with only a normal Sunday morning schedule. However tonight the Choir had been invited along to sing for the Finchampstead Society – so in actual fact there wasn’t really that much opportunity to rest up!

Like many of the Choir Christmas engagements it’s a familiar repertoire that we sing through – stopping off at all the old favourite Christmas Carols. Although sometimes it gets a bit tedious doing the same stuff over and over again, it is always nice going and singing for other groups outside the normal Church events. Even better this time that aside from the usual mulled wine and mince pies, each of the choir members got given a box of chocolates as a thank-you for turning out and singing.

Anyway, next weekend we’ve got Beth’s school Christmas party to look forward to, after the spectacular Cirque Noel, they have had a total change of direction, and this year are holding a party at the School, complete with outside caterers. We’ve also then got the aforementioned Nine Lessons and Carols on the Sunday, which heralds the last frantic week of choir engagements before the annual marathon of six services in twenty-four hours at Christmas itself. Now I’ve just got to make sure that I keep the cold under control, and make sure my voice lasts!!!