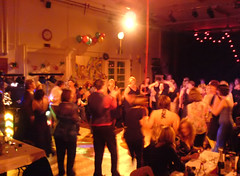 One of the skills of a good DJ at a party, especially your average Christmas party with a diverse bunch of people is picking the right music to play, especially finding the right era for the group. Whilst you can never hope to get music that will appeal to everyone, quite often you can hit on almost a critical era, that brings a large enough number of people to the floor to get everyone else dancing.

Last night we had Beth’s Christmas Party at the school, and we had quite the most dramatic example of hitting the right era I’ve ever seen. One minute there were barely six people on the dance floor, then the DJ sticks on Boogie Wonderland and within seconds almost everybody was up dancing!

It was a bit of a different occasion from last years party, but conversely it was much better attended. The food was a pretty nice buffet, pretty similar to what we have at Harvest Supper at Church, with cold meat, salads and jacket potatoes, and a selection of tempting puddings too.

Unfortunately we weren’t able to stay to the end since our buyers were due round to measure up relatively early this morning, and that was quickly followed by a choir duty to sing at a wedding up at the Church (with all Christmas carols not surprisingly).

Anyway, I’ve added the pictures I took during the evening, to the selection from the parties last week, so you can see what a load of teachers look like when they let their hair down!