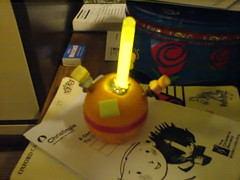 I posted a week ago that like Chelmsford Cathedral, we were trying out Glow Candles in our Christingles this year. We’ve just got back having sung in the choir at the second of the three Christingle Services today, and acted as stewards for the third, and all in all the new style Christingles seem to have gone down pretty well.

There certainly have been complaints, and indeed the Rector was fielding a number of grumbles of the sort being raised by MP Eric Pickles in the article in the Telegraph, with grumbles about health and safety gone too far, taking the magic out of the service, and so on, but universally the comments weren’t coming from the children or the parents. Certainly amongst the children of the choir who attended the 4pm service, in fact one of the choristers said she wasn’t interested in the orange or the sweets, but only wanted to take away the glow stick, and various of the other children were having a great time rushing around the lawn outside the parish centre in the dark with the glow sticks too. There were also a number of positive comments from parents, who in previous years have had worries with their younger children, and had a fairly stressful time through that part of the service keeping an eye on their offspring making sure they didn’t burn themselves. Indeed, one parent actually thanked us for taking the decision to change. 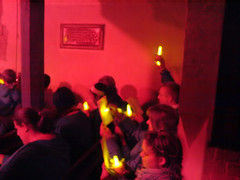 Whilst the glow produced by the Glow Candles probably isn’t as bright as the candles would be, it certainly is enough to be effective, especially at the later services where it is dark outside, and was certainly enough for people to be able to read their service sheets by.

The change to Glow Candles was also used to make a theological point. Since once they are lit they stay alight as people left the Church, this was to symbolise everybody taking the light of Christ out into the world – something we couldn’t do with candles. 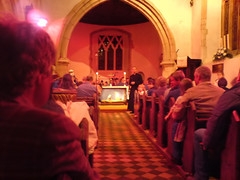 Whilst by no means do I think this is the end of the discussion, it certainly seems to have been pretty successful in terms of the target audience. I’m sure when the time to organise our Christingles comes around again we’ll have people arguing for a return to candles. I took some snapshots of the 6pm service, which can be found here, which hopefully will give some idea of the differences with using the Glow Candles – it will also give some idea of the numbers of people we have to handle – upwards of 250 people at each of the three services, with even people sitting in the choir stalls behind the altar at the 6pm service.