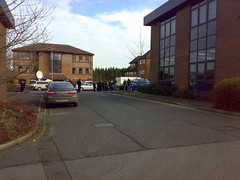 I’ve just snapped off a picture of the press crews from the front of our building, to give an indication of where this mornings mail bomb in the Vantis building. In doing so I actually got cornered by a couple of reporters from the Wokingham Times, looking for quotes, unfortunately I doubt I gave them what they wanted as I said that apart from the disruption, and a little bit of interest, most people up here were more interested in the Cricket! Basically once we’d found that there were only minor injuries, aside from being annoyed that the exclusion zone wasn’t bigger (i.e. to include us being sent home), it really hasn’t affected us, and although it’s probably big news for Wokingham, it really isn’t overly big in the scheme of things.

Anyway, I suggested that somebody more senior representing the company might be able to give them an official quote, but in the end it looks like Charysse, one of the customer service team was sent down to speak to them rather than any of the directors. However she did give them more the kind of comments they were looking for, saying how worrying it was having something like this so close. Have to see if it appears in the paper tomorrow now… Even she doesn’t get quoted in the paper, two of the other guys in the company wandered over to see what was going on at lunchtime and got interviewed by the BBC for their news items.

In terms of a connection with the incident in London yesterday, the London Standard has confirmed what various people here thought, which is that the building, amongst other things, processed speeding tickets. Since yesterdays bomb hit Capita, who run the London Congestion Charge, could it be a motoring connection?