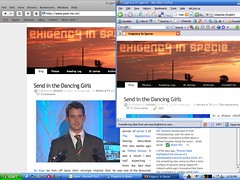 The announcement of a Windows version of Safari, the default browser under MacOS X has provoked a good deal of discussion.

Personally I’m of the opinion that it’s existence is primarily about providing a platform for iPhone development on Windows – very much that they need a platform, rather than any deep seated belief that the Windows platform needs another browser.

From my point of view that is made even more clear by the lengths to which Apple have gone to make it look and operate exactly like the MacOS X version, even down to the look of the buttons and scroll bars.

The identical behaviour even extends to how the browser renders fonts and graphics. If you take a look at the picture above, this shows the blog open in Firefox and Safari on Windows. Looking at the fonts, you’ll notice that the text looks subtly different – some people regard it as more blurry – this is because the browser is eschewing the usual Windows Cleartype in favour of the algorithm used by MacOS X. In theory, the MacOS X algorithm is intended to produce fonts that are as close to the original typeface design as possible, whilst Cleartype fits to the pixel grid – better screen wise – at the expense of accurately rendering the typeface. Coding Horror has a good article explaining the differences – ultimately it comes down to personal taste.

The other thing to note from the screen shot is the differences in the colour of the sunset picture at the top of the page. This is because Safari on Windows also treats graphics containing embedded colour space information differently. The sunset picture on the top of the page contains the colour space information from the original picture I took – Safari finds this and renders the graphic differently (although not necessarily correctly – ironically only the now defunct Mac Internet Explorer correctly interpreted colour spaces) resulting in the more vibrant orange hues that can be seen in Safari.

All of these duplicate features make it clear that alongside converting Safari, large amounts of MacOS X have been ported too to make it all work! Hence if you compare the memory usage of Safari with other browsers on Windows you’ll find it’s using a lot more than anything else…

Finally, one irony of Safari on Windows though is that whilst I don’t tend to use the browser much on MacOS X – preferring Firefox, I’m using Safari on Windows quite a lot because the text looks way better on the machine at work…

Update: The Safari on Windows debate rolls onward. With the news that the browser has been downloaded over one million times in the forty-eight hours since release, there is an interesting article from a Microsoft employee who initially is bemoaning the fact that Safari does everything itself, and then having read a posting by Joel Spolsky and the Coding Horror posting I mentioned above realises that it is unlikely that things will change!

The Spolsky posting is a good read in terms of the history – the Apple philosophy is very much about wanting to make fonts look as close to the printed original as possible – Joel explains in more detail why this is important to the desktop publishing and design communities. Choice quote of the posting has to be this:

“Typically, Apple chose the stylish route, putting art above practicality, because Steve Jobs has taste, while Microsoft chose the comfortable route, the measurably pragmatic way of doing things that completely lacks in panache.”

He also gives some opinions which go to explain why I’m preferring Safari on Windows – which are as much to do with familiarity as anything else!

2 thoughts on “Spot the Difference”