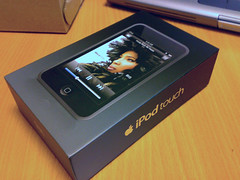 So this morning at work a small package turned up on my desk containing my new toy, an iPod Touch.

Depending on your point of view, this is either the ultimate touch screen and wi-fi equipped iPod or it’s a cut down iPhone with loads of functionality missing. Needless to say I’m thinking of it more in the former category, and thinking that I could use it for all the things that my short lived Nokia N770 – which produced a white screen of death a couple of weeks ago – was doing, so as a general media device with a bit of internet browsing. With the news that Apple are going to open up the platform it certainly seems like an iPod Touch will in the future become a good platform for that sort of thing – and probably a lot easier to sync up with my desktop than the Nokia N770!

As is traditional, I’m just waiting for it to sync large amounts of my music and pictures before I’ll get to play with it – I guess it will be tomorrow before I get a chance to seriously try it out!