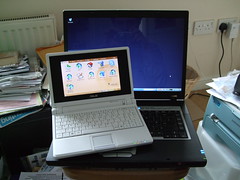 Back in the mists of 2008, before the rise of the Apple iPhone and iPad, it looked like the future of portable computing belonged to the netbook. Asus were the first into the market with their EeePC, and back then I picked up one of their 4G Surf models. Of course things have changed a lot now, and although there are still a number of manufacturers producing computers in the segment the market has been hit hard by the move to tablet computers.

Back then I quite liked the little computer, the battery life was pretty lousy, and the 800×480 display causes many websites to bring up a horizontal scroll bar. It also lacks any sort of 3G connectivity so it’s very much tied to needing readily accessible wi-fi. What has really stymied it though has been the general lack of support with the software.

The original had an install of Xandros Linux, although you could swap that for Windows XP if you wanted, however a critical factor in the OS alongside the restricted screen resolution was the tiny 4Gb solid state drive. Alongside being mindful of the limited lifespan of such drives in terms of write cycles, the space on the drive is severely limited for most installs. That tended to leave you relying on Asus to keep the OS updated, which they haven’t. Sticking with the official software you’d now be rather behind the latest versions of the OS, which is why there have been a number of attempts to provide a replacement OS.

I’ve had a couple of attempts trying some of the new distributions, but ultimately I’ve not really found them up to scratch, in particular you’d find that whilst some of the software worked on the restricted screen, at other times critical dialogs would have buttons off the edges of the screen. However with all of them there was a general feeling of sluggishness, basically the OS was expecting a faster processor than the old Celeron that powers the little Asus.

However having been playing around with the machine again this holiday I’ve come across another option – Peppermint – a Linux distro based on Ubuntu. One of it’s key features though is it’s designed to be small and resource light, ideal therefore for small comparatively underpowered computers like the EEE PC. It’s worth saying that installation on a small SSD such as the one in the EEE PC is not without it’s problems – the install dialogs are slightly too tall for the screen which is a pain, and also it won’t install straight off the USB drive. To get it to install you have to boot into Peppermint from the USB drive, use alt-F2 to run a command, and type the following: 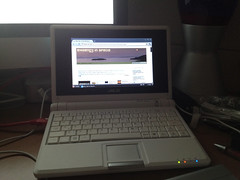 Then you need to run the installer using the icon on the desktop. After that though it all works.

You are obviously still limited by the screen resolution, however there are big improvements through the fact that Peppermint uses Chrome as it’s browser rather than the increasingly bloated Firefox. Out of the box the distro is trying to be a network connected OS so it provides links to Google Docs and Google Calendar rather than trying to squeeze office software on. It’s pretty straightforward to install Skype, which makes the little EEE PC a nice little device to use for video Skype calls. However across the board the little Asus feels more swift at doing what is asked of it rather than the sluggish performance I was seeing with other installs.

In fact I was so impressed that I tried the 64-bit version of Peppermint out on another old PC, my Evesham Laptop that has long since been gathering dust under my desk. Sadly although the OS works beautifully on the Evesham, it can’t cope with the dodgy power problems the rather badly assembled Evesham has suffered from – basically the PC gets increasingly hot until a loose connection around the power supply cuts out and the machine shuts down. Something for a hardware engineer to sort out at some point I suspect.

Anyway if you’ve got an old EEEPC around and want a fun little project to resurrect it, I can certainly recommend giving Peppermint OS a go. Whilst it’s not going to be rivalling a modern machine once it’s done, it does give you a perfectly usable little computer at the end.