Mobility Guru recently posted an article proposing producing a redesign of the Psion 5mx. For much the same reasons as I discussed a couple of months ago they like the small form factor, however they then list the OS, EPOC as a flaw and propose that a new Psion 5mx should use Windows Mobile, or even Windows XP instead!

Over the past couple of weeks, life for the business traveller has got rather more difficult. Immediately following the major security alert ten days ago, everything including the precious laptops were being checked. Whilst bag thefts have gone up as a result, there is no details of how many laptops have not made it out the other end in one piece.

However things improved a bit with the new regulations. Laptops no longer have to be checked, but the restriction is to a single bag, that dimension wise is about the same as a small laptop. If your laptop is small enough, you can now carry it, but you won’t be able to carry much else.

This of course provoked a good deal of discussion as to what might happen in the longer term. There is evidence that more business travellers are turning to private jets. However for the majority of people who will have to use regular planes, people will have to find ways to reduce what they carry. Certainly I can see smaller laptops becoming more popular for example the Flybook, with maybe a place for the Ultra-mobile PC. However the discussion left me thinking that what you really need is something that is portable, but can cope with being chucked in the hold if the alert level is raised again at short notice. If the baggage handlers are going to fling your suitcase around, even with a solid case rather than the more common soft sided laptop bags, a hard drive is still going to be shocked and jarred around. So effectively you need something solid state.

This led me back to thinking about my Psion 5mx (and I’m not alone), that I replaced with a Dell Axim a while back, and it’s bigger brother, the Series 7 and netBook. Although Psion stopped producing most of the machines a number of years ago, they are still pretty popular in some circles, with machines changing hands for reasonable amounts of money on eBay, and a number of mainstream companies still selling the machines. Indeed in amongst the latest toys, Expansys will still sell you an apparently new netBook. The netBook is sub-laptop size, comes with word processing, spreadsheet, diary, e-mail, basically plenty to keep someone productive whilst travelling. It even has wireless support so it can hook up to a local hotspot whilst travelling. But the key advantage is it is solid state, so nothing fragile to get broken. Of course it’s not a new suggestion – I commented on an article proposing using the Series 7 a few months ago, and it’s pretty easy to find happy customers picking up second hand models online for example here and here. There are also people who still carry around a Psion 5mx despite also carrying more recent devices. 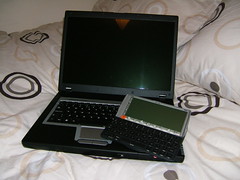 Even my little Psion 5mx is a worthwhile option – I’ve certainly used it on planes before. The battery life is fantastic compared to modern PDA’s, and laptops, and although it is small it has a proper keyboard, so I can type documents on it, and then tidy them up on a PC later. Take a look at the picture to see it in comparison to my laptop – which one would you rather carry around?

The simple fact is that modern PDA’s are essentially PC companions. Whilst Psion maintained they were producing PDA’s, the Psion 3 was probably the best PDA they produced – indeed there are people still using them today almost ten years after their heyday, and fifteen years after the first one appeared. The Psion 5 was really too big, and although they tried to redress the balance with the Psion Revo the balance was swinging towards the Palm idea of a PDA, without a keyboard.

In some ways, Psion were aiming slightly differently, and were producing pocket sized personal computers – certainly all the time I used my Psion 5 and 5mx I wasn’t synchronising them with anything else. My Dell spends most of it’s time hooked up to a desktop PC, and working in tandem with Outlook. Although it can play games, browse the internet, read e-mail and so on, it is tedious to actually write even short e-mails on it – I certainly can’t write up documents in the same way as I could on a Psion. Even years after it went out of production, the Psion 5 is still king when it comes to entering data quickly, just take a look at this comparison that lists data entry speeds for the current crop of devices – then scroll down to the speed for the 5mx for the same test…

Anyway, all the talk about the effects of the new regulations inspired me to dig out my trusty old 5mx. The batteries were all dead, but a couple of new Duracells and a standard CR2032 Lithium battery, all of which I could get at the local Tesco rather than a specialist retailer, and it started up fine. The contents of the internal ‘drive’ had gone when the batteries had died, but the add on CF card still contained data. Having put PsiWin onto my PC it also synced my current calendar, contacts and e-mail straight on without problems – even including the notes I have attached to some of the calendar entries. Certainly it seemed just as robust and stable as always. Bear in mind that on the same day I had to reboot the Axim four times after it repeatedly locked up talking to ActiveSync. As I mentioned before, the only thing that is a pain is linking to a mobile phone (no Bluetooth, only line-of-sight infra-red), and no networking. If someone would produce an updated 5mx with Bluetooth and Wi-Fi it would be great. However the current owners of the platform are focusing on phones, and whilst it may be exactly what most people lugging laptops onto aircraft actually need, the commercial wisdom is that nobody wants a pocket sized computer.