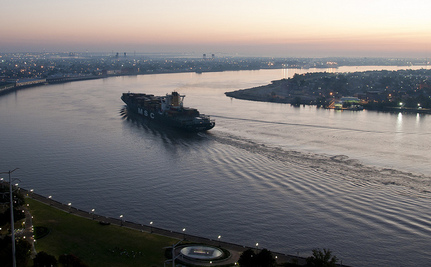 In a perverse way this story is kind of amusing, aside from the fact that this isn’t some great Damascus Road experience on the part of the American Petroleum Institute and others, they are purely asking for President Obama to dynamite a deeper channel down the Mississipi and drain the Missouri River reservoir so they can keep hauling more oil that if we continue to burn it at the rate we are is going to lead to more droughts like this in the future… Oh the irony…

These conditions have caused many members of congress and the business community to call on President Barack Obama to help Mississippi River shipping businesses get back to normal. They want the president to allow the Army Corps of Engineers to dynamite the rocky riverbed near two southern Illinois towns ? Thebes and Grand Tower ? to deepen the shipping channel, allowing ships to pass through on less water. They also want the Corps to stop reducing water flow from a Missouri River reservoir, which the Corps does each

year to conserve water for the spring. Members of congress have sent a letter to the Army Corps of Engineers and spoken out about the issue, and on Tuesday, the American Petroleum Institute, National Association of Manufacturers, U.S. Chamber of Commerce and other trade groups and organizations sent a letter to President Obama, urging him to declare emergency in the region and calling for ?immediate assistance in averting an economic catastrophe in the heartland.?