For those of you who didn’t catch the 9/11 special on channel Five last night, Simon Armitage has written a poem to commemorate the fifth anniversary of the World Trade Center atrocity.

Written as the first-person account of a fictional trader near the top of the north tower on that day, it was dramatised by Rufus Sewell, and was accompanied by news footage from the day itself as well as interviews with three people who were in the Towers during the attack, and family members of two of the people who died.

I know of Simon Armitage’s work as he is one of the required poets for study on the AQA GCSE syllabus, and have always thought of his work as pretty straight forward, with some depth but not necessarily to my taste. But this work, Out of the Blue, I find to be remarkable in the way that it captures the surrealism of the day, along with the pathos of the ordinary men and women who were caught up in the attack.

I think any attempt of mine to explain the poem would fall short of the reality. You can download the whole text of the poem in .pdf format here:

Out of the Blue by Simon Armitage

The Unofficial Apple Weblog linked to this great video taken from an internal Apple talent show.

The full story is told in the captions, and included are some of the other entries, many of which are pretty dreadful. The guys routine is a really funny ode to a Canadian Fed-Ex lady, but one that ultimately resulted in the VP who was organising the talent show sacking the poet for unprofessional conduct…

The sequence is well worth watching, although for a family audience you should be aware that there is a naughty word included in the captions. You can also take a look at the poet’s website for more of his work. 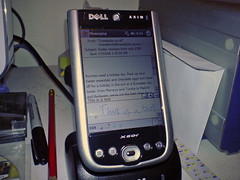 One of the other things I’ve been trying recently with my PDA has been using handwriting recognition to make input easier.

When I initially got the PDA I gave the built in handwriting recognition a go, which was really no good at all with my usual illegible scrawl, so I gave a copy of Calligrapher from Phatware Software a go.

Now it has to be said that this was a lot better, but I still ran into problems. A lot of the time it got things pretty well correct, however even with the ability to tweak the letter shapes it was looking for, there were still times where the way I wrote a letter totally confused the software. As a result, it actually worked out quicker to still use the on screen keyboard.

Anyway, since last year, Calligrapher has moved on, and now has the ability to learn from it’s mistakes, so apparently after a couple of weeks of training it can get something like a 95% success rate. Following some glowing reviews, I thought I’d take a look.

I’m still at the training stage, but most of the time it is pretty good. Since it is also backed up with a good spell checker, and a good deal of intelligence, it often modifies it’s ‘reading’ of what you have written, based on what you write afterwards. In the picture you can see my dodgy handwriting, and a successful interpretation of what I have written above. Incidentally, once you get beyond the training stage, it will allow you to write anywhere – not just in a fixed area at the bottom of the screen.

Now the only problem I can foresee is the combination of my lousy spelling and lousy handwriting, which gives it a double problem working out what I’m trying to write!

OK, so I’ve decided to move my writing – toast haiku and all – to a new blog. I’ll still appear here, but I think that my tiny poems do tend to get lost amongst the posts and occasional rants that Richard and I have about things… So, they now have a new home. I hope you’ll join me there!

The cat, regal and
haughty, pushes my book and
possesses my lap