On the way to visit Beth’s parents, the last township we pass through is Atlee, Alberta. As you can see from the wikipedia entry, it officially has a population of 28, but I’m guessing that is a bit optimistic. This is a video we shot a couple of years ago – we drive through Atlee about a forty seconds in, and then cross the track bed of the old railroad before continuing on towards the ranch.

As you can see, there really isn’t much there. There is even less now. 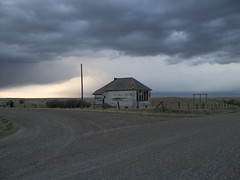 A few weeks back, Beth’s parents headed off for some winter sun in Hawaii, and when they returned, the one remaining building, the old schoolhouse was gone, burnt to the ground, apparently by the local authority because the building was considered dangerous.

As anyone who looks at my Flickr photostream will know, I have taken lots of pictures of the building over the years – despite being pretty exposed and windy up on the prairie, and getting increasingly dilapidated, it has withstood the worst that Alberta could throw at it. The dilapidation, combined with the prominent location (you could quite literally see the building from miles away down the road) and the fantastic skies out there made for some fantastic pictures. 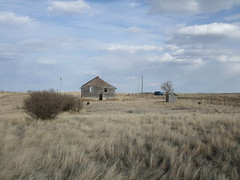 Perhaps because Atlee is a bit out of the way, it has survived where many other of the one room schoolhouses have now gone. Whilst I’ve seen a lot of signs marking the locations of the old schoolhouses on our travels around the province, this is perhaps the only one I’ve seen that was still standing in situ – indeed when you looked inside it was very much as if the teacher and children had just moved out – the blackboard was still on the wall, and the frame for the swings in the grounds still stood, along with the outhouse. True, it’s location probably isn’t suitable for any kind of tourist spot, but as a piece of Alberta history, it was probably one of the last relics of how the people of the prairie used to live. 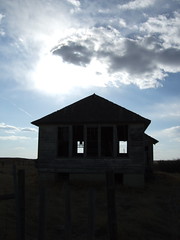 In it’s heyday, Atlee was one of a number of townships, regularly spaced along the railroad line – next along is Buffalo, then Cavendish (note the alphabetic naming too). The local farmers would bring their produce to the railroad line where it would be shipped, and the township had a school for the local children. As the roads and transport has improved, the need for frequent townships grew less. So Beth went to school at the one room schoolhouse in Buffalo – that building too has long since gone, moved to provide extra classroom space elsewhere. Grain and produce can now be shipped by truck, so the railroad line has gone. People can drive to the post office, so Beth’s parents go to Jenner for to collect the mail, and their postal address is Jenner. The only place the Atlee name is still used is by the oil companies, and for a communications mast that stands nearby, and now the last building is gone.

Certainly it is going to be strange next time we head out that way, not having the old schoolhouse marking the way. Atlee really is now just a dot on the map…