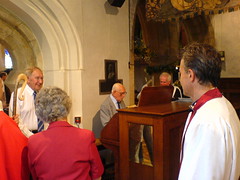 Over the six months or so that the organ has been out of action, I’ve been periodically adding shots to the set of pictures, showing how things have changed.

This weekend marked the return to service of the original organ, although the restoration is not quite finished. The original trumpet rank was beyond repair, so a new one was ordered, however when it arrived at the organ workshop it was found to have been damaged in transit. As a result the last rank, and another rank of pipes that has to be put into the organ casing after the trumpet rank are yet to be installed.

Today I have added one last picture to the set which shows one of a number of special guests at the service on Sunday morning. The gentleman at the console is a former Director of Music at St James. Now in his nineties, he can remember the Compton organ when it was originally put in the Church back in the 1930’s, and also the hand pumped organ that it replaced. 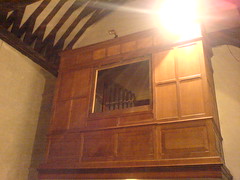 Tonight I got my first chance to check out progress on the organ.

Initially, it was hoped that it would be back in time for Easter – certainly it seemed that having the Bishop come to re-dedicate the instrument at the end of July wouldn’t be a problem, however it wasn’t until this week that work finally started putting the instrument back together again.

On Monday the youth room in the parish centre was filled with pipes, and several pews had been removed to accommodate scaffolding to allow the workmen to remove the Charles 1st coat of arms that was placed in the centre of the panelling. The coat of arms is to be moved elsewhere in the Church, and an ornamental grille will replace it, giving the sound of the organ a better chance to come out into the body of the church.

As of tonight the scaffolding had been removed to allow us to use the church at the weekend, however the front is open allowing us to see some of the pipes. You can also see the new compressor and wind-chest from the back, and also looking through get to see the roof of the knave at an angle that will probably never be seen again, as you look from the vestry through the opening in the front of the organ casing. To be honest, putting aside the pipe/electronic debate one of the biggest arguments for getting rid of the old Compton was that we would be able to get rid of the great big box at the back of the church and open up the arch into the tower. As anyone who has been in our church will realise, the organ has a pretty big and oppressive presence over the back of the church, leaving the back few rows, and the door into the vestry fairly gloomy. I always thought that taking that out, and opening the arch into the base of the tower behind would allow light in from the west window over the great west door, and bringing a good deal of light to that part of the church. However, the argument was lost, and we’ve spent the money restoring the existing organ. Thankfully the talk of expansion was dropped, and we are restoring the existing Compton, and remaining pretty true to it’s voicing, and design (both the great and swell will still be in the swell box, and the organ will still make use of extension to broaden the range of stops). Hopefully what we will end up with will be a more reliable and renewed version of what we had before, able to last another seventy years!