Before the iPhone, before the iPad, Apple had a first foray into the mobile device market, and it didn’t go all that well…

Great article by Harry McCracken reviewing the original Apple Newton Message Pad. Whilst the product may be considered a failure, the technology and trends it started can be tracked directly to devices and software we use today. 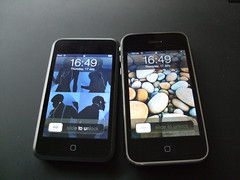 I’m just coming to the end of my first week with an iPhone 3G. Unlike some I didn’t sample the whole queuing and activation chaos last Friday. I managed to get one of the limited stocks that O2 had available online last Monday by getting in within the first hour before they had all sold out. That’s not to say that getting the phone out of DHL, the courier O2 used, was without incident. Beth was in Reading anyway, so said she would pick it up on the way home, the key thing being that she didn’t have the card as she wasn’t going home first. No problem, all she needed was the parcel number which we could get off the tracking site, and then we looked up on the DHL site and got the address of their depot over in an industrial estate near the Madejski Stadium, and looking at their opening times they were open until 7pm. So Beth went in on the way home, and handed over the parcel number – â€œNot this depotâ€? came the response, all the inland deliveries go through a separate depot on the Basingstoke Road, and that one closed at 6pm. Beth had just enough time to nip across and pick it up, and brought it home.

If you’ve been reading the computing sites you’ll I’m sure realise that activation was a bit of a problem, and it was much the same here. Although I could connect to the regular iTunes store the special activation service was totally snowed under, as a result activation had to wait until Sunday when we were back from our weekend away, where it connected first time. The one final part of the jigsaw, porting my number across from 3 was pretty painless too, although there was the inevitable attempt to try to tempt me to stay despite me repeatedly saying that I was moving for the iPhone 3G, not because of their prices. The number swapped over smoothly on Wednesday, and seems to work fine for incoming and outgoing calls.

So what is the iPhone 3G like in general use? I can’t really compare it with the original iPhone as I’ve never used one, my primary comparison is with my old Nokia N73. The expectation was that the iPhone 3G would be a similar experience to browsing on my iPod Touch, which it is as long as you can get good reception or a Wi-Fi hotspot. The internet experience is streaks ahead of what was possible on Nokia N73, and is actually usable for more than just simple page browsing. For example I ran through the Royal Mail parcel redelivery site on the iPhone 3G this afternoon and everything worked fine – I doubt you’d be able to do the same on the Nokia N73! Phone call wise the iPhone 3G is fine, although if you were making a lot of calls I suspect some sort of proper headset would be essential. Text message wise it is pretty good too, giving you an iChat style conversation screen. Although the touch screen puts some people off, having got used to it with the iPod Touch, I haven’t had any problems and certainly have no issues doing what I need. If anything the lack of the keypad gives the screens much more space to use making them much more straightforward than the usual nested menus that have to be navigated with up/down cursor keys on a more traditional phone.

Stability wise the iPhone 3G is way better than the old Nokia N73, which even after a couple of firmware updates still crashed or locked up with depressing regularity. So far with the iPhone 3G the only problem I have seen is one which the iPod Touch exhibits from time to time whereby the browser crashes.

But what about the new features? The App Store and the GPS? Taking them in reverse order, it is important to note that this is an Assisted GPS – as such it’s not going to replace a proper specialist device like a Garmin eTrex – it occasionally has problems getting a fix, and there is precious little feedback compared to a specialist device. Accuracy wise on some informal testing it managed to place me pretty accurately in our back garden, although not exactly. Trying it out at the church it was also in about the right ball park, but not spot on. Having said that, it does what it is intended to do, and allows location based apps such as Vicinity to come up with it’s local information – great if you’re in a strange town and need to find a convenience store. I’d be intrigued to see how a full blown navigation system works in a car – my thought is that the reception isn’t good enough to work accurately enough.

This brings me quite neatly to the applications, and certainly from what I’ve seen there are some good little applications around. The aforementioned Vicinity is certainly recommended, especially if you’re often on the move and need to find your way around a strange town. Another fabulous little app that makes use of the Assisted GPS is Exposure Premium (also available in an advert supported version) which provides a nice interface to access Flickr pictures, but it’s real party piece is the way it uses Assisted GPS to pull back pictures taken close by.

Various established services have provided free applications to access their services, so we have a nice little Facebook application, versions of Shozu and Shazam, and a version of the fantastic Evernote that will quite happily allow you to photograph documents with the camera on the phone and then search the text in it – handwriting included!

Not all the freebies are novelty applications. Apple themselves have produced a little tool called Remote that gives you remote control over either your copy of iTunes or your Apple TV. There are also some free games, Tap Tap Revenge for example will be familiar to fans of Guitar Hero…

Gaming wise, the accelerometers are seeing a lot of use. Some, like Cro-Mag Rally use them a simple game controllers. In others, such as Motion-X Poker they are being used to simulate a real experience, in this case throwing dice. Finally you have games like Trism which takes a familiar puzzle game concept, and turns it on it’s head – literally – by the addition of monitoring which way up the phone is being held.

So was it a good upgrade? Definitely. As a phone and mobile internet device it is fantastic, streaks ahead of anything else in usability, especially for mobile internet. The addition of the App Store really opens things up and shows what can be done with the platform – certainly putting it up there as one of the best mobile application platforms around.