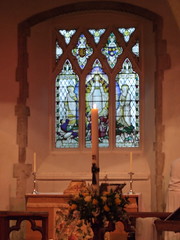 So that’s Easter over for another year. Over the last twenty-four hours we’ve been to five services, and we’ve seen over five hundred people pass through the Church.

We kicked off late last night with the service that starts the Easter Vigil, which as in previous years the Youth Group took part in, and as with last year, we didn’t have to! As with last year we helped set up the vigil service, and then could head home to bed, rather than spending the night in the Parish Centre. This year there were about twenty-five of the young people who spent the night at the Church, and as is traditional, a lot of them looked decidedly rough come 6am on Easter morning.

The 6am service was our first appointment of the day, along with another sixty or so people who also got up early to see the sun rise at the church – although thanks to the cloud you couldn’t see much – and then after the service everybody went over to the Parish Centre to partake of the traditional bacon butties and/or croissants. 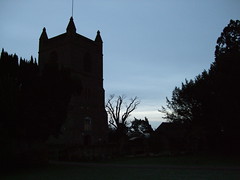 There has been a lot of grumbling about the fact that Easter this year doesn’t fall within the school holidays. That maybe a problem for some, but in terms of our numbers at Easter it seems to have made a massive difference. At 9:30am, even without a choir taking up a lot of pews, the building was absolutely full. We ran out of chairs, so had to go over to the Parish Centre to get some more, and ran out of hymn books too – a total of two-hundred and twenty-seven people squeezed into our little Church. Things were much the same come 11am – this time we had people seated in the vestry, and other people standing in the North Aisle – certainly it looks like another attendance in excess of two hundred for that service too.

The 11am was the big choir service of the day, and we had pretty well one hundred percent attendance – and we needed it as the anthem for the day was the Hallelujah Chorus, from Handel’s Messiah. It has to be said that we’ve been having problems with this over the past couple of weeks, and although it came together a lot better on the day, it still wasn’t quite right from where we were standing. Having said that, it went down really well – even inducing spontaneous applause from the congregation. As was said afterwards, it may not have been exactly right, but there aren’t many village church choir’s who would even attempt it!

Anyway, the weirdest aspect of the whole day was the weather. You can see a shot from dawn (there are more in our photo galleries) where it was dry but cold – but look at what it was doing a couple of hours later… to be followed by sunshine and blue skies a few hours after that! If you look at this picture, you can see that for a while the snow was actually settling too!

Easter Snow at St James from Richard Peat on Vimeo.

Last Saturday there was an opinion piece in the Guardian that has got a number of people talking.

The general gist of the argument is to lay the charge that falling numbers in the Church are to do with the move from a primarily Matins based service pattern to the weekly Eucharist model that the majority of Church of England churches now follow.

You only need look at the comments to see some of the reaction, and a quick look down my blog-roll finds reaction too – The Bishop of Buckingham is quite clear that it is flame bait, and quotes one of the comments saying as much. David Hodgson presents a pretty detailed rebuttal of the points made in the article, although the core point is summed up in his second paragraph:

Self raises some interesting issues, but I can’t help feeling here is another example of special pleading from a lover of the Book of Common Prayer and the Authorised Version of the Bible. The argument is familiar to all parish priests because they hear it so often from nostalgic older worshippers: the church used to be full on a Sunday, and a respected influence in the community – we used to have Matins and Evensong every Sunday, ergo, the abandonment of these servces is the cause of the decline in numbers and influence.

As you can see from the comments, I pretty broadly agree, and certainly you need look no further than our own Church in Finchampstead for evidence that David Self is wrong, since unlike most churches, St James retained the established monthly Eucharist/Matins pattern right up until the late 1990’s. At the point the service pattern started to change the numbers were low – and following the change the numbers did grow, but it wasn’t for the Matins services. Until Common Worship was brought in the pattern included a family Eucharist, a straight Rite A Eucharist (contemporary language), a traditional language Rite B Eucharist and Matins once or twice a month as a main service, and on the weeks with contemporary services sometimes placed before. The attendance figures are pretty clear – Matins was the most poorly attended.

Our current pattern still retains Matins in the pattern, but with a contemporary language Eucharist as the main service. It is worth mentioning that in terms of numbers, we do have a good attendance for Matins – we quite often have about sixty – it’s just that the Eucharist is pulling in up to 150 people for the monthly Family Eucharist, and more than 100 for the regular Eucharist when the Children are at Sunday School.

With those figures, it is quite easy to argue that Self is wrong – however if you look further into our attendance figures, maybe he is not totally wrong. Reading one particular paragraph, and then considering the changes that we at St James have made to our service pattern, maybe he does have a point.

Near the beginning, Self said this:

The neglected virtue of matins was that, although it required a half-decent choir, it demanded little emotional or theological commitment and minimal participation. Those attending merely had to sit or stand as required and mouth the words of the hymns. It was the ideal service for those who felt they should be seen â€œto do their dutyâ€? on Sunday mornings; a part of â€œbeing Britishâ€?. But to take part in holy communion requires you to make a public profession of your faith by walking up to the altar rail to receive the sacrament.

One of the things we noticed about our numbers was that there was a quite significant difference between our attendance figures, and the numbers who went up for communion, sometimes as much as ten percent of the congregation wouldn’t be going up to the rail. This is exactly the point that Self is making, that people feel uncomfortable about the public profession of walking up to the altar rail – equally they also feel uncomfortable about being seen to be sat in the congregation.

Having said that, with a regular dose of Matins in our service pattern, these people weren’t going to those services – they may be uncomfortable with going up to the altar rail, but matins didn’t attract them either.

As a result we added another Family Service, but very much one that wasn’t a Eucharist. It was specifically targeted at those outside the Church, so the general idea was to be welcoming and inclusive. It generally targets the children so the hymns are much more in the chorus vein, and the messages and stories are often simple and easy to understand.

The new Family Service is now one of our main growth areas – to the point that we are now going to do it twice a month in an effort to try and reduce the numbers as we are regularly filling the Church.

So Self may be wrong about matins – but could he be absolutely right that we need to provide a simpler service to provide for those who are uncomfortable attending a Eucharist?

So this morning we had the most major change in our new service pattern, the additional family service, for which all the other changes have been made.

It is probably fair to say that whilst Rev Richard put a lot of time and effort into the revamped 11am Family Eucharist service (targeted at a slightly more all-age congregation), this was the one he was most nervous about, and possibly the bigger gamble – a thirty minute Family Service of the Word at 9:30am targeted squarely at children.

I thought we should show support in the new venture, so got up somewhat before my usual wake up time for a Sunday, and arrived about 9:20am. It has to be said that on arrival things didn’t look overly hopeful – there were only two or three cars in the car park, and when I walked into the church the place was empty, and I half expected to see a tumbleweed rolling down the aisle. I then spotted a rather worried looking rector pacing up and down.

I have to say that I wasn’t massively worried about it, one observation that has frequently been made about our Family Service congregation is that they are usually pretty last minute. As neither the choir nor servers were on duty at this new service there wasn’t the usual number of people turning up early. I’m exceedingly glad to say that I was right. In the space of about ten minutes from 9:25am to 9:35am we had over 100 people come through the Church door, going from a totally empty, to a packed out Church.

The service was a simple Hymn/Prayer structure, that pretty closely followed the first part of the old Family Service. Rev Richard did a great talk to the kids, complete with puppet assistant (I did suggest bringing the puppet along to brighten up an Evensong at some point…), and the Fledgelings ‘Band Box’ was raided for cymbals, drums and so on to play during the songs. The service ran for almost exactly 30 minutes, and was followed by drinks over in the Parish Centre for which unlike normally the majority of the families went over. There were lots of positive comments, and many families saying that they would come back next month.

More than that, having the 9:30am family service and not running Sunday Club didn’t seem to affect the numbers at the 11am service, that seemed to be about normal – on a Sunday with Matins at 9:30am, there is a sometimes noticable dip in the attendance at 11am, as many people will attend Matins instead. Hopefully that is an indication that we are doing something in the new Family Service that is attracting new people, rather than splitting existing congregations. It also makes a nice counterpoint to George Carey’s opinion, reported by Ekklesia last week that the Church has “lost its vision and is becoming a club for the elderlyâ€? – whilst I’m not saying that it is easy – it seems that there is a market for fairly traditional services that attract young families without turning services into something that would be unrecognisable to people who have been members of the Church for many years.