Yesterday we headed down to the opening day of your new store in Festival Place, Basingstoke. First off I have to say that after many years having to either head into London or drive a long way to find an Apple Store it is great having two within a short drive, with you having opened a store in the Oracle, Reading just last month. We did avoid the craziness in the morning but we had a great time none the less.

I went along with my two year old daughter, who has been using Apple products for pretty well all of her life. It didn’t take long for her to get the hang of the touchscreen interface on my iPhone, iPod and iPad, indeed now she expects most devices to have such a screen and gets frustrated when they don’t. This brings me to a first suggestion, your children’s area. Whilst it is nice having a low level table, and child sized seating, the devices there are all Mac’s. Although children do quite easily pick up the concept of a mouse and pointer, my daughter is much happier with the direct interaction of a touch screen – as you have said on a number of occasions recently, we’re living in a post PC world now. 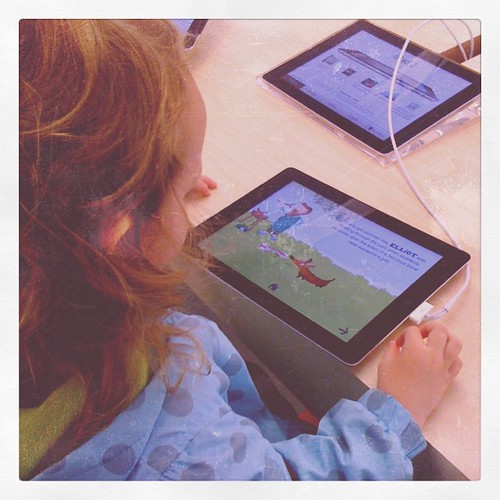 As a result we went to look at the iPad’s which do have children’s software installed, but are all on tables at a very child unfriendly height. In the end my daughter asked for a chair, and one of your excellent staff kindly obliged with a stool from the Genius Bar.

As you can see from the picture that put her on just the right height to play some games on the iPad.

Games weren’t the only thing we tried. My daughter wanted to talk to Mummy, so we thought we’d try out another of the features of the iPad – Facetime.

We have used your video calling application quite frequently at home – calling between Apple products it seems to pretty consistently produce a better quality video connection than the most obvious competitor Skype, indeed in one situation recently Facetime made a connection easily when Skype couldn’t get through at all. However as I’m sure you’re aware Facetime only works over wi-fi.

No problem of course as your stores have free wi-fi. Looking at the strength display it had a full strength signal, however it fairly obviously was not a good internet connection, the demonstration iPad struggled to produce a reasonable picture with a decidedly low quality result. It would certainly be worthwhile investing in some faster wi-fi connections for the store to enable a good demonstration of this feature.

Anyway, one last idea which comes from my daughter – she would like you to provide beds at the Apple Store so she doesn’t have to go home. The store kept her occupied and entertained for all of a wet afternoon, and she didn’t want to leave! I did eventually manage to get her out and heading home, but I am sure we will be back.