So I’ve just about got everything going in Leopard having done the upgrade. The only significant application that isn’t working is iMovie – but then that didn’t work under Tiger either. (Having had a trawl around the net it seems I’m not alone in having problems with it on a G5 either… The main tip seems to be to run it on an Intel based Mac, but it’s still not perfect…)

As with the upgrade to Tiger the OS upgraded without too many problems. I opted for the archive and install method this time around, which shifts the existing system directory out of the way, installs the new operating system and then pulls in all the settings and configuration, leaving everything else intact. This is regarded as a somewhat more reliable way to upgrade than using the straight upgrade as there is less chance of problems caused by leftovers from the old system as it is a completely new install. The third option is the erase and install that I used with Tiger which does a totally new install, and then pulls all your settings across from a backup as if it were a new machine.

As with any upgrade, it was then a process of working through all my core applications to work out whether I could get everything done.

There were a couple of minor casualties – one being Menu Meters, a little tool I had running to keep track of what the machine was doing. However I found a worthy replacement in iStat Menus that does much the same, but adds details of fan speeds and the current temperature inside the machine to the mix.

Amongst the applications that gave me grief during the update, my process for keeping the e-mail I receive in an average day (see this posting for details of what I do) came to a crashing halt. I started the new Apple Mail, and was greeted with a message stating that both MailActOn and MailTags had been disabled. Both applications have beta versions that are Leopard compatible, however that was only half the story. Along with the two applications I use Smart Folders extensively to group e-mails by subject and type, and to be frank they were being less than smart immediately after the update. Fixing that though was just a question of patience – sit back and wait for a few hours whilst the machine rebuilt the spotlight indexes.

Perhaps the application (aside from iMovie) that gave me most hassle was ClamXAV, my virus checker – as it would just keep crashing. Eventually I tracked the problem down not to an issue with Leopard, but with one of the new features of the latest version that made use of spotlight – disabling that and effectively reverting to the same configuration I had before solved the problem. Aside from that, the only annoyance is that Leopard insists on loading X11 whenever ClamXAV starts up.

The last application so far that has been a problem has been Google Earth which locked up every time I tried to start it. This I nailed down to a problem with my MyPlaces.kml file – once I removed that everything worked fine, and I built up what I needed from the copy of the file on my PC version of the application.

Sorting out Google Earth also turned up another change – the way networking is set up in Leopard which has changed a bit from Tiger. This also brings me on to my biggest recommendation, grab yourself a copy of the excellent Mac OS X Leopard The Missing Manual by David Pogue. It was an excellent reference during the upgrade process, and was indispensable in quickly getting the PC/Mac networking working again. Granted I could probably have worked it around after a while fiddling, but the book has a step by step walkthrough, including pointing out the obscure settings that you might otherwise miss.

Mac OS X Leopard The Missing Manual also has a great appendix going through the upgrade process (including how to use an iPod to do it if you’ve broken your DVD drive), and as always is punctuated by David Pogue’s great writing style and sense of humour.

For example he describes the Leopard first boot title sequence as:

â€œ… one of the most visually stunning post-installation OS startup movies in historyâ€?

So was it worth the effort? I’ll have to give it a few days of usage, however so far there hasn’t been any absolute show stopping problems that mean I’ve had to resort to the backup as there were when I upgraded to Tiger. True there are some applications that aren’t quite there yet, but equally there are now starting to be some Leopard only applications, so now seemed like the time to move. There are some slightly annoying look and feel changes that I guess I’ll get used to – but some real nice new eye candy too – if you’ve got Leopard and a load of pictures in iPhoto, check out the fantastic mosaic mode on the screen saver. Next thing to look at I think will be getting Time Machine going…

Having a play around with the latest version of Google Earth, I thought I’d check out the place in the US where I worked over my last summer vacation from University, and close to the only mountain I’ve ever climbed, Flagg Ranch Village in Wyoming. However, it’s not the place it was when I was there, if you look at the location on Google the roads shown are laid out as I remember, but switch to satellite only view and all you can see is just open ground – the rustic buildings that I remember are all gone. However too the north is the big posh new Flagg Ranch resort. Having said that, from my memories of the complaints that we got from the mostly American clientele about the rustic conditions (we can only get one radio station!) a posh resort is probably going to go down better… 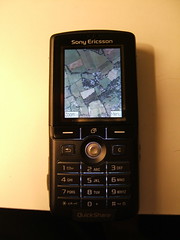 Grabbing a copy of Google Earth today the download page pointed me in the direction of other things that I might find interesting, one of which was Google Mobile Maps. Essentially what it does is take the underlying database used by regular Google Maps, but put a J2ME front end onto the data so that you can access it from a mobile phone.

Of course with the volume of data that Google Maps chucks around, you’d expect the performance to not be exactly stellar, however I was really impressed by the speed with which it generated maps. I put in our post code and it zipped straight to our street. It even has the same choice as the full size Google Maps to switch to a satellite view – the shot above shows the satellite view of the Church.

But it’s not just the maps that have made the transition, it also hooks up to the search facilities to allow you to find local amenities such as restaurants and hotels. Coupled with the fact that it includes the Get Directions facility and it is a fantastic little package. Of course you’ll probably end up paying for it in data charges, but if you find yourself needing a map, all you need now is your mobile phone, nothing else. In fact the only feature it actually lacks, is the ability to work out roughly where you are but I suspect that may turn up at some point too. Even if it’s not something you’re going to use a lot, Google Mobile Maps is definitely a useful tool to have installed onto your phone for an emergency.

For a good while, we’ve had a copy of Google Earth sitting on our PC’s, and even introduced Beth’s Dad to the application when we were over in the summer. However the application has been resolutely PC only, with only a pretty terse message about a possible Mac version.

Various Mac sites have discussed the lack of a version and to some extent I didn’t really believe that a version would ever appear.

Officially, a version hasn’t appeared, but today I came across a posting on the Unofficial Apple Weblog saying that a copy of the Mac version had been leaked. The poster was somewhat nervous about downloading it, however a look down the comments found a stack of people who had, and no reports of any major problems.

Anyway, I grabbed a copy of the archive, and installed it, and it works, and very well too – at first glance it even seems to be more responsive than the PC version, even compared to a fast laptop like mine. I even discovered that they have updated the data set with decent views of Arborfield too!