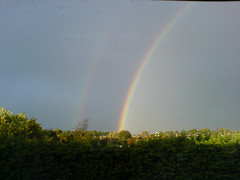 Today was one of those days that I was glad I now have a camera phone that can take half decent pictures. All during the day the weather had been pretty changeable, although leaning more towards the dreary drizzle that you tend to get coming in to winter. However about half-past four we had a really heavy downpour, complete with heavy dark clouds. But as with the rest of the weather today it moved off quite quickly, to be followed by fairly clear skys behind. With the sun starting to set it meant we got the spectacular sight that I’ve tried to capture here, a double rainbow, the brighter part of which arched over the whole sky, and the most incredible contrast between the white within the rainbow and the heavy grey outside. I have to say, the picture doesn’t really do it justice.

Thanks to the big new barrier across the road from last week, trying to get around and through the A327 roadworks was really a non-starter this morning. Quite aside from making the turn without getting hit by someone coming the other way, as the blockade forces you up onto the pavement without any sort of ramp, it’s not going to be overly nice on the tyres and suspension!

However, if you’re down that way, maybe having dinner at the Tally Ho next to the bridge, take a look at the latest attempts to discourage people from driving through, as it is really quite entertaining. Basically, Hampshire County Council have set up a slalom course to test out your driving skill, complete with barriers half blocking the road, and cones.

It’s worth saying that even with the slalom, it would probably still be faster to drive through Eversley than go through the water roadworks in Finchampstead, especially with the roadworks on the A321 pushing traffic through Finchampstead too.

To be honest though, I’d rather Hampshire County Council was spending their time getting a major road reopened as quickly as possible, rather than wasting time on comedy like this!

Heading down towards my favourite set of roadworks, the A327 closure in Eversley, when I got to the point where the Road Closed sign usually sits, I found that the sign and the barriers had been cleared to one side, as they had been last weekend. The five cars in front of me all went through, so I followed. The road was in much the same state as it was last weekend, with a new smooth surface, but no lines, and with cones and obvious signs of ongoing work on the footpaths on each side, but no workmen, and no work vehicles. There was also traffic coming the other way, including a lorry. The only hazard in the road was a cone over a manhole cover, aside from that there were two clear car widths through the whole of Eversley, aside from going round the road closed barriers. When we reached the other end it transpired that it wasn’t actually open, as the two sets of barriers on the other side were in place, so I assume that some frustrated motorist had cleared the barriers out of the way. 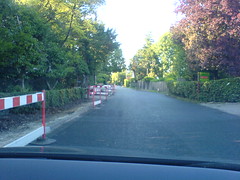 Anyway, coming back tonight, rather than the long back route I took last night to avoid both these roadworks, and the water works in Finchampstead, I headed straight for Eversley. Again, the barriers were across the road, but two clear car widths through the entire roadworks, with just cones along the footpaths. Again, I wasn’t the only person going through, however the traffic was quiet enough that I could pull over and take a picture. I could have stopped anywhere through the works and taken a similar shot.

Bear in mind looking at this picture that these roadworks were advertised as being 24 hours a day – which they evidently aren’t (and couldn’t be because of all the residents along the road). They are also causing daily chaos around the area, with residents in Finchampstead being particularly hard hit by queuing traffic in some places, and rat running drivers in others, the problem being especially bad at rush hour. However at these times, nobody is working on the works here, indeed the road surface itself was finished more than a week ago. To be honest I’m left wondering quite what Hampshire County Council are playing at. This week part of the M25 was resurfaced and reopened in under 24 hours after a lorry exploded and damaged the surface, and yet they are closing this, and other major roads around the area for six weeks at a time… Surely it is possible to open the road outside the times that the workers are actually at work, such as evenings and weekends, and at least give the people in Finchampstead a break? Or maybe as all the chaos is in Finchampstead, in Wokingham district, they really couldn’t care two hoots?

Incidentally, when I reached the spot tonight where the barriers had been moved this morning, the old barriers had been replaced with some much more substantial blocks, in an attempt to stop a repeat performance I guess. Why is it that local councils seem unable to communicate with each other? In particular over roadworks.

Before we went on holiday, we had seen signs warning that the A327, that runs through Arborfield and Eversley, would be closed for “up to six weeks” from 15th August. Whilst it was quite good that they were doing it when it would be quiet over the summer (aside from the last two weeks when the schools are back of course), it would still be fairly chaotic.

Anyway, I took a look at the weekend, and established that the official diversion route was on large roads suitable for the traffic, and went massively out of my way, but that it would be easier to go round back roads either through Finchampstead, or Swallowfield. This morning I went through Finchampstead, and it didn’t take much longer than usual. Tonight, all was going well until I turned into Longwater Lane, the road between Eversley Cross, and Finchampstead, to be greeted by the first picture. The second is half a mile further on, crossing the border into Berkshire. It was absolute chaos, with traffic queuing back towards California Crossroads, along through Finchampstead Village, and even round residential side streets. People were even resorting to using single track back lanes to get through.

Listening to the radio I found out that it wasn’t just caused by the closure of the A327. In addition, it seems there were roadworks on the diversion route too. On top of that, one of the other possible routes was also closed, and there had been an accident in Bracknell. As a result most of the roads to the south of Reading were jammed. Each closure was the responsibility of a different local council. I would have thought that anyone with any sense would have realised the chaos caused by the closure of one main road on the border of several council areas and consulted so as not to close any others whilst the work was taking place…