We’re just back from the performance of A Child of Our Time by Tippett, and Vaughan Williams Serenade to Music. Myself together with several others from St James, and a number of men from the Wokingham Choral Society, were there to bolster the tenor and bass lines of the chorus, which since the chorus was made up of students from Ranelagh and Holt schools, Holt being a girls school, was a little lacking in numbers of boys singing as against the girls. We also had four soloists (although Serenade to Music was apparently written for sixteen) and the Basingstoke Symphony Orchestra. The performance came off pretty well considering the difficulty of the Tippett – as one of the men from the Wokingham Choral Society said â€œWe didn’t quite come off the railsâ€?, and although we came pretty close at times, the choir was able to pull it back on track. Of course, talking to Beth and Becky, who were sat in the audience, they didn’t notice at all the points we went wrong, and thoroughly enjoyed the performance. 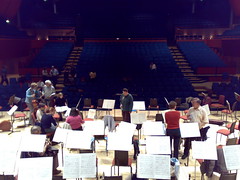 All in all it was a bit of a busy day. We went straight to Basingstoke from Church, where we had the usual jam packed Mothering Sunday service. At 2pm we started the final rehearsal – the first time the choir had sung with the orchestra – and went through with that until 5pm. Then we had a couple of hours off before we started the performance at 7pm.

The choir were seated in a balcony above the stage, which gave us a good view of proceedings, especially where I was sat in the front row of the tenor and bass section, right in the middle. During the break I snapped off a picture of the view from my spot in the choir. Seating wise the arrangements were as I described in the rehearsal earlier in the week. Richard, the other visiting bass and I managed a lot better to hold our line against the visiting tenors on the other side, and the young Casanova on the other side actually seemed to click into focusing with being sat in the Anvil – as I mentioned before he seems to be pretty talented when he was concentrating! Amusingly, in the break this time he was flirting with a couple of the Holt alto’s – even serenading them singing over a mobile phone, spurning the Ranelagh soprano’s he was flirting with on Tuesday. Actually, I shouldn’t make too many jokes about it, as my first girlfriend was in a choir with me many years ago, and I don’t know what stories may come out if I persist!

It was a little cramped in the choir stalls, but significantly less so than the chairs in the Ranelagh school hall. However, I did come pretty close to knocking my copy down onto the heads of the percussionists below at one or two points standing up and sitting down. It was also a bit of an eye opener seeing backstage at the Anvil too, and certainly gives me a much greater appreciation of the amazing performances that the Basingstoke Tappers put on every year – it was bad enough with all of us, and we didn’t have any costume changes or large bits of scenery. Incidentally, they’ve just released the tickets for the next Basingstoke Tappers production, which after a break last year, again includes the Chosen Few Big Band. I have to say that the previous times they have appeared, Beth and myself have been some of the last sat in the auditorium – whilst various of the audience seem to make a run for the car park once the dancers are off, the band has for their previous appearances played on for a bit, and it is really fantastic with the acoustic in the Anvil to hear a live big band in full swing. (Excuse the pun there…) Anyway, there are more details of the upcoming Basingstoke Tappers show on their website.

Apparently, the reason for the choice of the Tippett was because it was a long standing ambition of Stephen Scotchmer the conductor, and head of music at Ranelagh, to perform it. I have to say that although it was certainly dramatic, it’s not really my cup of tea to listen to if I had a choice. However, it certainly helps though to hear it complete – during rehearsal you don’t really get the whole picture without the parts sung by the soloists. It also helps to read the background notes about the piece to properly understand it. Alongside that, I often find that I really enjoy live performances of a great variety of music, even if it’s not something I’d go out an buy on CD, or listen to on the radio. There is always a definite buzz in hearing live music of any style – and the full orchestral versions of the spirituals are fantastic. The Vaughan Williams which has each vocal line splitting into three parts (so twelve part harmony) is something that needs a big choir to do, and sounds fantastic with the orchestra.

Anyway, despite the complications of the work, singing at the Anvil was certainly a memorable experience, and something I’d want to do again. Hopefully we’ll get an invite to have another go in two years time!

Last night we had the final rehearsal for the Basingstoke Symphony Orchestra/Ranelagh and Holt School Choir concert which myself and four others from the bass and tenor lines at St James are helping out with.

Last night was the first occasion when everybody was sat in their allocated seats for the concert. The choir in total seems to number about 200 people, the majority being alto or soprano. Bass and tenor, including us and some help from Wokingham Choral Society only comes to about fifty people.

As I’d been allocated the first bass part, I’ve managed to end up sat right on the very front row of the choir – so no chance of me being able to hide up the back. Since the rest of the Ranelagh boys are also allocated to first bass, there is only one other guest singer on first bass with me, with all the other guests split between second and third bass, with a similar situation in the tenor line.

In my seat, on one side I have the other guest first bass, who unfortunately is adjacent on the other side to the guest first tenors – who not surprisingly can be a bit off-putting when trying to follow the bass line. The theory is that the rest of the first basses should be giving enough of a lead to hold us on track, however on the other side of me is one of the Ranelagh boys who based on the rehearsal last night is your archetypal young person with a talent for singing, but who knows it! When he actually was singing he had a good voice, and was pretty well note perfect, however a lot of the time he was either chatting with his friends sat next to him, or flirting with a couple of the girls on the front row of the soprano line. There were actually three or four points in the rehearsal where one of the teachers had to stop the rehearsal to tell him off – something which has happened in the preceding rehearsals too. He also had a tendency to sing the most interesting part in certain places, so at times when I was trying to keep with the other first basses who were all along the front row, as opposed to the second and third basses behind us I realised he was singing second or third bass instead, and on one occasion was even singing the tenor part. So with him on one side, and the tenors on the other, it was amazing that I managed to stick as much as I did to my part. Apparently the vocal parts are all mirrored in the orchestra most of the time, so hopefully it should be fairly straightforward to follow those instead if need be.

The big day is Sunday, when we spend the afternoon at the Anvil rehearsing with the orchestra, and then go on stage in the evening. It should be an exciting evening – and the first time in a long while I’ve sung in such a big choir with a full orchestra. Tickets are still available from the Anvil box office on 01256 844244.