So we’ve just got home from the post Developer Day Geek Dinner, following on from a busy day soaking up information, and networking at the second Microsoft Developer Day.

Looking at the business end of the day first, the events at Thames Valley Park were a bit different than the last time. The team had taken on board feedback from the last session, and also introduced some new ideas. Apparently the event was sold out before even the agenda had been published, and certainly with a dedicated team behind it determined to make it better, I’m sure we’ll see another event soon.

Since there had been comments about the lists of recommended books we had had at the first day, this time we had a Computer Book reseller along. There was also someone showing Windows Mobile devices at a Windows Mobile table, although the other subject area tables didn’t seem to overly work as an idea. One disappointment was the distinct lack of freebies this time out. Whilst I’m not that bothered about getting a Microsoft Bottle Opener, last time we got beta copies of Visual Studio 2005, and certainly with a large group of developers it would seem to be a good opportunity for Microsoft to distribute some more previews of upcoming products.

Having said that, the sessions were all excellent, and a again a real mix of topics and presentation styles.

Perhaps the most frustrating of the sessions, wasn’t to do with the presenter, but more to some of the attendees. It was on the topic of using .Net code in SQL Server 2005, however the session got dragged down into a discussion about pretty detailed stuff about how to install .Net code into SQL Server, largely meaning that we ran out of time. The structure of the day is such that an all the topics the sessions are giving at most a broad overview of a topic, so whilst the time consuming divergance was of use for this group of people who were obviously having difficulty with the topic, for others in the room (one of whom actually shouted out to get on with it after a while) it was decidedly frustrating when they knew there was limited time.

Talking at the Geek Dinner, it seems that one of the sessions I thought was good, really divided opinion, with another person thinking it was one of the worst. Mike Roberts session on .Net Development Trees, had come out of a series of blog postings he had written on the subject. However rather than just bash through a series of slides based on the article, he tried something different, which initially involved us splitting into groups, and the results of the group discussion driving the rest of the session. Of course the key difference between this sesssion and the others is that we ultimately didn’t get a complete overview of the entire subject, however you can get that from the original article, however what you did get was much more of a chance to interact with the other developers, and in some ways realise that whatever companies we actually worked for, in many cases we were getting the same sorts of problems, and hence why a development tree was so important.

After the final session, we finished with a bit of group discussion about what could be done better or differently. One interesting idea was for a sort of bring and share type session, where participants bring their laptops, and would get the latest builds of software to play with. Certainly this seemed like a great idea from my point of view. In our normal working lives, unless it is specifically your job, most people won’t get to play with preview builds. Indeed many will be one or two versions behind the current leading edge. Since for many people I have spoken to, the popular sessions are the previews of new features, this idea seems to move that concept on further, and actually give people a chance to test drive these things. In addition, leading on from the development tree session, I found that much more interesting, in that we made use of the fact that this was a group of developers together in a room, leaving the stuff we could just read off the notes to time we had on our own. 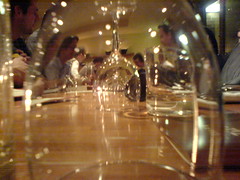 Whilst on the subject of talking to other developers, after the developer day had officially ended, there were drinks at the Revolutions Vodka Bar in Reading, followed by dinner at Zizzi’s.

Dave got his first chance to podcast, thanks to the original podcaster dropping out through illness. Heaven knows how me and Beth will sound on the podcast, although I doubt you’ll be able to hear much of us over the noise. Incidentally, although she didn’t come to the day, Beth came to the dinner. She did seem to enjoy herself, being married to me she can cope with geeky topics, and even found somebody with whom to talk about Shakespeare!

Perhaps the only down point of the dinner was that thanks to people changing around their orders, the food was ultimately very late, with main courses not arriving until 10pm, when many of the people who were relying on trains had to get going. Having said that, everybody seemed to have a good time. I’ve posted my snaps of the evening to onto Flickr, so hopefully there will be a group with other peoples snaps up there soon. Incidentally, if you attended the event, don’t forget to get your feedback in so as to influence DDD3! 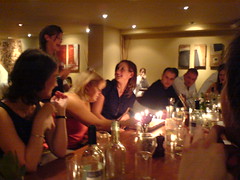 So tonight we went out to celebrate the 25th birthday of one of Beth’s fellow teachers. We met up with Kerri and another 14 of her friends at Zizzi’s in Reading, oddly enough where we’re going for the Geek Dinner in a couple of weeks. If there are any Geek Dinner attendees reading, I can confirm that there is Wi-Fi coverage in the restaurant. 😀

Anyway, it was one of those evenings where there was a pretty broad cross section of the hosts friends from a number of different places – old friends, housemates, workmates. Having said that there were a lot of teachers, however we were also sat next to an old University friend of Kerri’s who worked for the Crown Estate, and was rather surprised that I knew what it was! (Essentially it is the land which is owned by the British Monarch, as a role – rather than the person who currently sits on the throne. However although the Queen theoretically owns the land, it is passed to parliamentary control in return for her payment from the civil list. The current portfolio of property is worth in excess of Â£4 billion, and includes quite a bit of land around the local area. You can read more about them at http://www.thecrownestate.co.uk/
)

There are a few more snaps from the dinner over in my Flickr stream. They were again taken with the camera on the Sony Ericsson K750i phone, although this time there were at least three other people in the party with the same phone – definitely seems to be getting popular!

Remember how I waxed lyrical over Gregory Maguire’s rewriting of ‘The Wizard of Oz’, ‘Cinderella’ and other well known fairy tales? I’ve found another author who does the same for nursery rhymes. And fairy tales. And any other literary reference he can cram into a sentence.

I ordered Jasper Fforde’s newest book, ‘The Big Over Easy’ because of its blurb – who wouldn’t want to read about the murder of Humpty Dumpty, I thought? Especially if the DI is named Jack Spratt, with a DS named Mary Mary? Sounds like fun. Little did Richard know that he would be subjected to a contant barrage of impromtu readings and ‘I can’t believe he did it AGAIN‘s on the plane to Canada this summer.

Fforde has created a world in which popular culture is literary – ever want to go see a full-audience-participation production of Richard III, a la Rocky Horror Picture Show? (‘When is the winter of our discontent?’ bellows the audience. ‘Now is the winter of our discontent’ answers the actor…) See more of what it’s like in ‘The Eyre Affair’. Ever wonder how many neuroses a large egg might have living in today’s society? Find out in ‘The Big Over Easy’. And I’m sure there will be many more interesting questions and answers when I’ve read the whole of Fforde’s output to date. Because I’m that hooked.

It’s not just that his sense of humour saturates his books – his website, and advertisements in the back of his novels are amazingly funny as well. Ever wonder how toast got to be such a popular breakfast food? Maybe it’s because of the work of the sterling people at the ‘Toast Marketing Board’. And wouldn’t it be neat to be able to own a pet that has been extinct for hundreds, or even millions of years? Leave it to Pete and Dave at ‘Pete and Dave’s Dodo Emporium’ – all dodos guaranteed non-feral!

All I can say is that I’ve always wanted to meet Mr. Rochester, and Thursday Next, the heroine of ‘The Eyre Affair’ gets to to this, and change the course of one of the best-loved books of all time. What avid reader wouldn’t want to be able to do that? Please, meet Jasper Fforde’s creations in person – they are well worth your time.

So today, I had a free day of training thanks to Microsoft, complete with lunch, and a stack of freebie loot too!

When I heard about the event, although it meant giving up a Saturday, I thought it was definitely worth the effort, as did a number of other people from work (nine from SSE in total), and also Phil and Catherine came along for part of the day too.

It was the first time I’d been onto the Microsoft Campus, having seen it for a number of years alongside the railway going into and out of Reading, and very nice it is too, complete with a lake, ducks, and even what looks like a picnic area.

There was a broad range of sessions, and to some extent I stuck to sessions I thought would be beneficial work wise, covering data access, .NET attributes, code refactoring, test driven development, .NET debugging and Pocket PC development. In between all of that we had a good lunch – a barbeque, and plenty of opportunity for chatting.

None of the presenters were actual Microsoft employees, although there were a number around helping run the event. All were good, although perhaps the most memorable was Jim Cooper, an Australian with a beer obsession. Every example application either reminded us to buy him beer, or revolved around beer in some way! He also seemed to get slightly obsessed with Catherine at one point in the attributes session, although I don’t think he realised her husband was sat next to her!

On top of all of that, everybody got a copy of the latest Visual Studio 2005 Beta, a CD wallet and keyring, plus various people got spot prizes varying from books to complete software packages.

All in all, a very worthwhile way to spend a Saturday – the kind of training day that usually would cost the best part of Â£1000 per participant. Something I’d definitely do again if the opportunity arose.

For some other opinions of the event, have a read of Dave’s review, and also a review by Ian Smith, a fellow Channel 9’er to whom David introduced me.