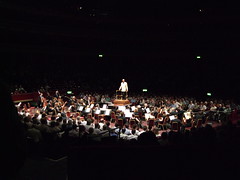 On Saturday I, together with ten other people from St James sang in what was quite possibly the biggest choir I’d ever been a part of. I’m not quite sure of the exact numbers, but the choir took up all of the space on the stage at the Albert Hall, and a good deal of both the stalls and circle, and was large enough that the orchestra and conductor had to be on the arena floor.

The event was organised by The Really Big Chorus who describe themselves as Britain’s largest choral society – their mailing list includes over 8500 contacts representing an estimated 35,000 singers. They do three major concerts a year in the Royal Albert Hall where essentially anyone can turn up and sing. By virtue of the old adage of safety in numbers there will be enough people around who will know the particular pieces of music, and will be able to carry you along if you are a weaker singer, as such it’s a great way to get an experience of singing in a major venue. This time it was Mozart’s Requiem, something I’ve done before, but not in quite such an illustrious venue.

This time we were going along in part to support the father of a friend of ours who at the end of last year bemoaned the fact that when he was younger and had sung in a choir he’d never done a big concert. As a result our friend and her sister arranged a special surprise for his sixty-fifth birthday and arranged for him to come along and sing with us. I dropped around a copy of the Chorusline Bass CD (a special series of CD’s that are useful for learning particular parts), which he sang along with at home, and then on the night he sat between a couple of our choir members who are also in other local choirs who were able to keep him on track. Things were made slightly more difficult by the fact that we were sat in the back row of the bass section, well away from the tenor and alto sections, and with some of the soprano section behind us – on the bass line we are usually used to getting cues from the alto or tenor part, taking them from the soprano isn’t something we’re used to, however after the one hour full choir rehearsal it was straight into the performance.

Not surprisingly there were one or two ropey bits, but in the main we made it through, and certainly it is a fantastic experience singing in the Royal Albert Hall with so many others. The atmosphere is certainly not quite like a professional concert, as the bulk of the audience are supporters, but it is still great fun, and I’m sure something I hope I can do again before too long.

I’ve uploaded some pictures from the event to our photo galleries, and Beth took a short video panning across the whole choir, which should give some idea of quite how big the choir actually is.