My shareholding in SSE has paid it’s first dividend – yesterday I got a cheque for the grand total of 65p. Not only that, in a another envelope they also sent me a cheque for the remaining money in the scheme that produced both the share I blogged about, and also the second share that turned up a month later – that was for 49p… 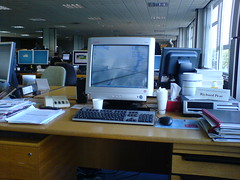 So today, after almost four years, I’ve finally left SSE, so no more long daily commute down to the South Coast, which with the arrival of snow yesterday evening made me really rather glad!

My last day was pretty well just clearing up. I spent the morning going through all the rubbish on my hard drive so that whoever gets the machine after me has at least some space, although they’d do well to just rebuild the whole thing from scratch, as it hasn’t had anything much done to the install of windows for at least a couple of years, and it’s a bit slow to say the least! This afternoon was the physical clearing up of going through the stacks of paper on my desk and in the drawers, fishing out the stuff that was useful, and disposing of the rest. As per usual I didn’t actually leave on time, as I waited around whilst Rob put a build of the application I’ve been working on for the past few months onto the test server, so as to test the results of the changes we had made over the past few weeks to reduce the memory usage. Certainly with the brief chance I got to try it out it seemed to have solved the problem, but unfortunately had hit the performance somewhat. Having said that, between myself, Rob and Darren we had managed to clear the majority of the outstanding incidents from the last round of testing, which is what I had said I would do before I went. I would have liked to have seen it onto the live box, but unfortunately the memory issues proved to be a lot more complicated to solve than expected, thanks to the joys of Infragistics. 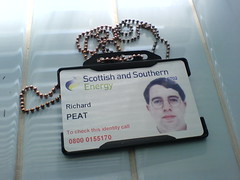 Interestingly, the news this morning did an item about the demise of the carriage clock as the leaving gift of choice, so I was quite interested to see what, if anything, the guys from work had got for me. Thankfully I was spared a loudspeaker announced presentation, and instead was given the card and present over lunch. It seems that in much the same way as with my birthday and Christmas presents, I lived up to my reputation of being difficult to buy for. As I don’t drink, they avoided the old staple of getting alcohol, and in the end plumped for book tokens, which I suspect will end up going towards computer books – if Beth doesn’t get to them first!

What has been quite interesting over the past month since I resigned has been quite how many people have admitted to not being happy. I’ve said before that there are two very distinct groups in the IT department at SSE – the long-term people who are generally in the final salary pension scheme, and then a pretty regular turnover of more recent arrivals who usually depart before the notice period changes at five years. The ones in the final salary scheme seem pretty well resigned to the long haul, however in the recent arrivals I know at least two or three in the team who are actively looking, indeed one admitted that he turned down a job offering a 25% pay rise only a few days after I resigned. A number of people said that they were surprised I hadn’t gone sooner with the journey I’ve been doing every day. In general there seems to be some uncertainty as to where peoples roles are going, particularly with the increasing presence of Infosys and TCS staff working on projects around the building. Anyway, I’m all clear of that corporate politics stuff now. 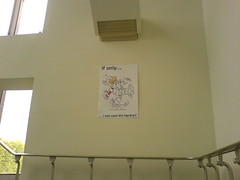 So what will I miss about SSE. Well they are a nice bunch of people, and certainly there are a number of them I’ll miss having lunch with every day. Job security wise, it was certainly a good place to ride out some rough times in the IT industry. However what I won’t miss are some of the big company stuff such as the slow procurement processes that have to be signed off by multiple layers of management, and the real problems getting things done quickly. I also won’t miss the obsessions, such as the stair safety where at times people would be fined for not holding on to the handrail, and the rest of the time you had posters on every landing warning you to hold on. In fact there were signs everywhere, from those on the stairs, to signs in the toilets asking you to keep the blinds closed so as not to upset the team of women on the ground floor who could see the frosted window of the gents toilet from their desks. I also won’t miss my security pass, which combined with having to identify myself by my payroll number a lot of the time did sometimes make you feel like a number. (I am not a number, I am a free man!)

Anyway, I’ll finish off with one of the comments that was put in my leaving card:

Parole at last! Let us know what the secret is… I’ve uploaded the pictures I took at the Havant Fun Day today. All the pictures were snapped using the new K750i – a first big test.

About the only criticism I have of the phone is that there is a delay between pressing the shutter, and taking the picture, which takes a little getting used to. However aside from that I am really pleased with the quality of the pictures.

You can browse the rest of the pictures in the photo gallery.