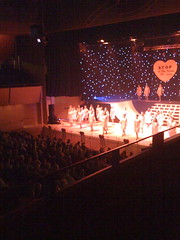 Sometimes there are times when you really feel for people organising live shows, Friday night was one of those nights. Over the years we seem to have turned into one of the many Basingstoke Tappers groupies, and have been along to every summer show they’ve done for the best part of a decade. Reading through the programme before the show started, Tracey Kinchenton’s introduction was bemoaning the fact that several of the dancers had injured themselves, and also that Matthew Winchester, one of the singers for the evening had also had to drop out. However they had managed to get a singer called John Amobi, who had had a number of lead roles in West End shows as a replacement. However the problems hadn’t ended there, in the week before the show, and after the programmes had been printed, Steve Pert, who is as much a part of the shows as the dancers themselves, was diagnosed with glandular fever and had also had to withdraw. They had managed to get previous vocalist June Boyce along in his place, but needless to say at that short notice it had thrown the whole programme into difficulties as June had to do songs from her repertoire with little time to learn the numbers against which the dancers would be dancing.

The problems were probably more apparent in the first half, where the vocalists came and did songs on their own, plus we also had a little of the first night nerves as things perhaps didn’t seem quite as polished as in previous years. However I don’t quite know what happened at half time, but the second half was way better.

One of the things we really noticed this year, was how things have progressed. The third of the singers on the bill was Francesca McMahon, who has grown up as one of the Basingstoke Tappers. A few years ago she made her first attempts at singing on stage at a Basingstoke Tappers show, since then she has come on leaps and bounds, and now sings regularly, and looks set for a good career in the business. What she has which the other vocalists don’t is the fact that she can dance in with the rest of the dancers, and is perfectly capable of pulling off a pretty complex routine, whilst still giving a great delivery on the song. 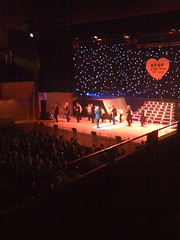 Another noticeable change is in the number of boys Tracey has managed to recruit. A few years back there were just one or two, now she has sixteen, and a number of them are good enough to be able to dance on their own, so we had one number with John Amobi and all sixteen doing the Temptations classic My Girl, and the two most experienced as front row dancers elsewhere.

They weren’t the only talented men on the stage. All the way through the show we were wondering about the slightly odd staging at the back of the stage – at the end we found out why it looked odd. Tracey had managed to get her son and a number of his friends who spend a lot of their leisure time hanging out at the various skate parks around the town to come and participate in the finale, where they rode their bikes live on stage performing a number of the tricks they practise in the park live on stage. No offence to the dancers, but in that finale I really can’t tell you what they were doing as I was watching the fantastic performance from the guys on the bikes! As Tracey said in her introduction to the finale, she wanted to prove that not all young people are hanging around on street corners drinking – slightly ironic considering that the town mayor who had made a speech just before the item had talked about attending a conference where one of the subjects was precisely that – anti-social behaviour from kids.

As you may know, this isn’t the only dance show we’ve seen this year, a couple of weeks ago we were down seeing another great show involving a friend of ours down in Plymouth. Although the two shows were rather different in scale and content, one consistent thing between the two was that they both included a tribute to Thriller, the Michael Jackson classic that first came out twenty-five years ago. Down in Plymouth what they produced was recognisably close to the original routine. The Tappers with a cast about twice the size produced something that was more inspired by, including a diversion into a Missy Eliot track (isn’t Shazam great) part way through, and a forest of dancing trees along with the ghosts, ghouls and skeletons.

All in all, despite the clear difficulties they’d had putting on the show this year, it was as much of an entertaining evening as ever, and we’re looking forward to seeing how Tracey and the Basingstoke Tappers better the bikes next year.

Last night we had our now traditional late July trip down to Basingstoke to see the annual Basingstoke Tappers show with our friends Catherine on stage, and her husband Phil hard at work keeping the whole show running smoothly as stage manager.

In pre-publicity the show, Beyond the Sea, had been subtitled ‘Cruising with the Tappers’ – but the theme had broadened somewhat giving pretty much of a world cruise, taking in places including London, Paris, Russia and Cuba to name a few.

After a break last year, the Chosen Few Big Band were back, and certainly earned their keep playing for every other number. It certainly seems to be more flexible in terms of routines to have a live band, as they can include short reprises to cover clearing the stage – something that is difficult to do with pre-recorded tracks, quite apart from the experience for the participants of working with live music. There were also a good number of contributions from Tappers regular Steve Pert, who took plenty of advantage of having the big band around to do some of the standards. Alongside Steve there was a new face for the shows in the form of Trisha Bassett an Ascot based singer. One of the dancers, Francesca McMahon also showed how far she has come since she sang for the first time in one of the earlier shows, performing a version of Midnight at the Oasis.

One of Steve’s numbers that caught Beth by surprise was when he performed Jump. Beth has only ever come across the original Van Halen version, whereas with a big band, Steve did the Paul Anka version, which like the whole album – Rock Swings – is quite a surprise when you’ve only ever heard the original.

Being the fifteenth year of the Tappers show, the Friday night performance was graced with the presence of the Mayor of Basingstoke, and there was a chance to reminisce over some of the past shows, and even a return to the amazing basketball routine from last year (and again nobody dropped the ball this time around either). What is a testament to the people in the company was when towards the end the members came forward grouped by how long they had been part of the company – although there was a good crowd of newbies, the majority have been dancing with the company for ten to fifteen years.

Certainly it was as entertaining as ever, mixing good music, cute moments with the real little ones, and even the odd quirky moments – the two penguins in the decidedly tropical Under the Sea I guess must have been on holiday!