The following is a snap from our day trip down to Somerset to see Sheila Baker, Beth’s Grandfathers second wife, who was on her annual trip back across the pond. The sign is by the roadside on the hill past Wookey Hole Caves where we spent most of the afternoon. 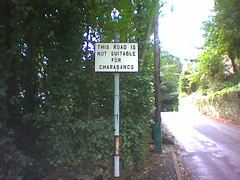 For those of you who are wondering what on earth a charabang is, the dictionary definition is a sort of tourist motor coach. The term still gets used occasionaly, but has really dropped out of common usage.

After visiting the caves we stopped in nearby Wells to go to Choral Evensong at the Cathedral. Wells have several choirs that share service duties. The first choir is the alto/tenor/bass parts, all men, then there is a junior choir of boys, and a junior choir of girls. We had the men with the girls on Saturday. The service was the normal variation on Book of Common Prayer Evensong that only seems to get celebrated at Cathedrals, fairly traditional, however unlike some, they were using a modern translation of the Bible for the readings. Whilst I do enjoy a well done Choral Evensong at a Cathedral, it always bothers me that it furthers the image that the Church is stuck in the past, trotting out services that have been unchanged since 1662. Almost like the sign harking back to a bygone age, and great for the tourists, but with no relevance to real life, and in a language not used by the people of England today.

However, on further investigation I found a sign of hope. As many will know, one of my big bugbears is the way the ‘traditional’ Lords Prayer has hung around. I grew up with the modern version, in fully contemporary language services, and the services that were produced during the seventies only had the modern words. With the advent of the Alternative Service Book in 1980, again the contemporary language services included only the one Lord’s Prayer. However in 1987, John Bickersteth, the then Bishop of Bath and Wells, together with Colin James the Bishop of Winchester succesfully pushed through General Synod and got the traditional language Lords Prayer printed side by side in the modern service. Since then the two have always appeared together, although in the current Common Worship services the modern form is printed first, with the traditional offered as an alternative. Quite amusingly, in the traditional language services, both versions of the prayer are also offered, although I doubt anyone would ever do a traditional language service but lapse into the modern Lords Prayer. However the reverse is quite common, including in most services at St James. Basically the entire rest of the service is in modern language, and yet, for no reason other than because “everybody knows it”, we drop into traditional language for the one prayer, and then switch back to modern language for the rest. To my mind, quite apart from the bizarre shift, it is also a misnomer that “everybody knows it” as for many years, it has not been taught in most schools, so at any services we hold when non-church goers attend, if the text of the Lords Prayer is not printed, people don’t know the words!

Anyway, the sign of hope, considering the actions of one of their previous Bishops, was that in the Sunday Service book, the cathedral not only was using a modern language service, but was using the modern language Lords Prayer. More than that, the optional drop back to the traditional form had been removed totally. Whilst it is a small change, it does give me hope that if a Cathedral can move its services forward, then maybe the Church of England can stop trying to be like on of those Charabangs, struggling up the hill ignoring the sign…

2 thoughts on “Not Suitable for Charabangs”