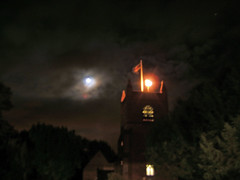 Tonight, as the nation marked two hundred years since the British won the Battle of Trafalgar, Finchampstead joined in by lighting a beacon at the highest point in the village, at the top of the church tower.

As we did back in 2000, the church also provided free drink for the revelers, many of whom had climbed the hill from a Trafalgar party down in the village. 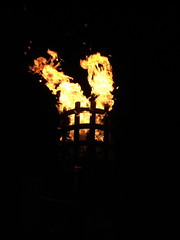 We didn’t go along to the party, however I went up for the beacon lighting, and took along my camera. Unfortunately, what I probably also should have taken was a tripod, but anyway, I’ve posted the best of the shots, some of which I’ve managed to make look more arty rather than shaky! I think the best pictures where the close up shots of the beacon itself that I took on top of the tower, which required minimal work in Photoshop to get presentable!

Anyway, you can see what I think are the best 15 out of the thirty or so I took in our photo gallery.