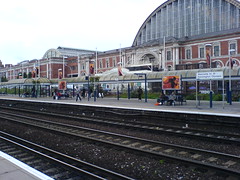 So after spending last Saturday wearing my developer hat, this week we spent our Saturday being Mac fans, at MacExpo 2005.

If you’d forgotten where you were going, you certainly were reminded about it when you arrived at Olympia station – the place was covered with matching Apple iPod adverts, including banners on every streetlamp, all with the familiar black figure, with white iPod, this time on a red and orange background. As Howard said on the way out, whatever you think about Apple and their products, you can’t fault their advertising for simple brand awareness.

Once inside it was straight into the action. Adobe was directly by the door, but behind that was the biggest stand at the show, the Apple stand itself. Alongside those were a number of other big names including BMW with their iPod equipped 1-Series, HP, Sony, Bose, and even a large stand from Microsoft showcasing Office 2004 and Virtual PC.

One interesting little game was to see if you could spot any PC’s. On the way in, all the registration and ticket sales were being carried out using iMacs, with many other stands using a Mac for sales as well as demonstrations. Even Microsoft had only Macs on show. In fact the only stand I could spot that was blatantly showing PC’s was Sony, who alongside demonstrating using their cameras with the Mac, had several of their own VIAO PC’s attracting little interest.

The big products Apple were showing off this year hardware wise were the iPod Nano, video playing fifth generation iPod and the new revision C iMac G5. In terms of software, the big new package was Aperture, best described as a professional equivalent of iPhoto. 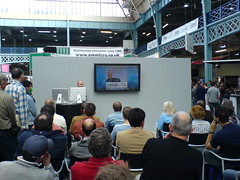 Needless to say there was a non-stop programme of demonstrations on the stand. Beth and Howard both got to play with the new iPods, and we saw the demonstrations of the new iMac, where much was made of the simplicity of the new Front Row software and it’s six button remote. I was really impressed with Aperture, particularly the speed with which it throws around batches of large RAW format images. Although it has good Photoshop integration, for most of the basic image edit work, you don’t even need to leave the application.

It wasn’t only graphics people that were provided for. Over in another part of the hall, there was Rod Gammons demonstrating how he put together a Liberty-X hit with Logic Pro, with the whole record, including vocals stored away in his Mac. 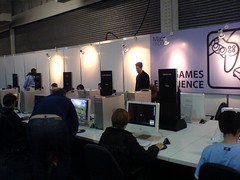 We finished off with a visit to the corner of the exhibition attempting to disprove the myth that you can’t play games on a Mac. Here they had a mixture of Macs playing everything from Sims 2 to Doom 3. However what Beth really liked was Lego: Star Wars. If you haven’t seen this, this review over at the BBC explains more. Essentially this is a Star Wars game aimed squarely at kids, with a number of sequences from the films recreated, but using graphics that look Lego bricks. There are a number of comedy Lego moments as everything breaks into constituent bricks when destroyed, and there are some comedy close ups of the expressions on the Lego character faces at key moments. Great fun, but we didn’t think we could justify a copy just for us big kids!

Anyway, we had a great afternoon seeing what is going on in the world of Apple, and we’re now looking forward to doing it all again next year!