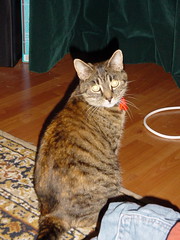 Reading Wil Shipley’s blog today it seems that his cats have been taking lessons from Sophie over making a fuss.

This morning, the word on the street (where the street is actually the foot of my bed) was that, sometime late last night, the cat food bowl ran almost empty.

This news was imparted to me with such urgency that I assumed it must have been meant for a much wider distribution, as if my fuzzy friends had used their super-keen senses to detect an imminent earthquake or another global-warming-induced hurricane.

It is well-known, of course, that cats can die to death from not eating for six hours. Or, in this case, from having to eat the kibble bits left on the bottom of the bowl, which is clearly less desirable, else why would it be left over? It was the kibble found wanting, and to have to eat it would be tantamount to death, at least.

We’re having a similar problem with Sophie at the moment. Like a lot of pets she is very much a creature of habit, and will start to get quite vocal if she doesn’t get fed at her usual times, don’t do things the way we usually do (for example when we go on holiday). On a usual day she expects food at about 6am, goes off and goes to sleep when we would usually leave for work, is sat on the stairs or behind the door when we get home, and in the evening it is demanding food for around 10pm.

However, this past week we have had the annual problem caused by the clock change, which of course she doesn’t cope with at all, so she’s decided that if we haven’t got up and fed her at 5am that we should be and she starts complaining. In the evening from about 7:30pm now she is trying to trip you up if you go anywhere near the kitchen, I assume on the basis that since we forgot to feed her until an hour later the night before, we need to be reminded early. In general we’re getting a lot of complaining because we’ve changed our schedule.

Matters are made somewhat worse by the fact that we’ve recently been shutting her out of our room at night, since she took to sleeping either on top of Beth, or wedged in on the end of her pillow, rather than on the end of the bed where Sophie had slept before – so we get pretty vocal complaining about that too. Remind me again, why is it that we have a pet?