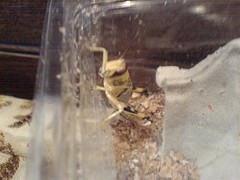 Today was our monthly Church Family Communion service, for which the main reading came from the beginning of the Gospel of Mark, describing John the Baptist and the way he lived.

Part of the reading described his diet as consisting of locusts and wild honey. So ever on the lookout for an interesting way into the reading for the children, Rev Richard spent his saturday on a quest – for some locusts!

He eventually found a pet shop locally who could let him have some to show, and who were willing to take them back tomorrow – Jurassic Pets, based in the Holme Grange Craft Village. (Locals might know them by their former name of Animal Aquatics)

The closest most people will have come to a live locust is seeing the ones eaten on I’m a Celebrity…, so seeing five of them up close in a box was quite an experience.

They appeared to me to be very similar to large grasshopers, and very able to jump based on the force with which they were attempting to leap out of the box. Suffice to say that the lid was firmly attached so that St James didn’t experience a plague of locusts…