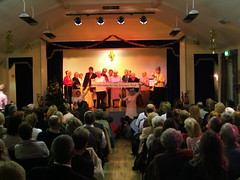 So tonight was the big night – the annual St James Christmas Concert in the Village Hall. If you’ve been reading the blog recently, you’ll know that we had some concerns over whether the Youth Group would actually remember all their words, although thankfully they all seemed to have put the first day of their holiday to use by cramming the script, so even our reluctant Joseph put in a good performance. Both the more traditional navtivity sketch that the younger group did, and the possibly more controversial modern retelling that the older group did seemed to go down well, with Paul doing a good job at cutting off any comments about the modern retelling before they started by putting the play into context. Rosemary also backed it up by changing one of her poems in the following item.

The rest of the evening was great fun, as in previous years, with a number of the younger members of the choir doing solo items, some for the first time. We also had some appearances from old favourites, such as the Mothers Union, with their reworking of the twelve days of Christmas, and Rev Richard with a St James version of Yellow Submarine! 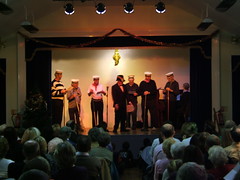 The Tuesday Working Party this year presented “A Touch of G and S” – Gilbert and Sullivan with new words. However the funniest part of the whole item wasn’t the song, but the fact that two of the pensioners in the Working Party who pretty well ended up having a fight with their mops during the number!

The choir finished off the evening with a few carols, and also some new words for Good King Wenceslas. Some of the pictures are posted in our photo gallery. However in line with the child protection policy, although we took pictures of everybody who performed (the full set is 32 pictures), there aren’t any of the children or young people generally accessible in the gallery.