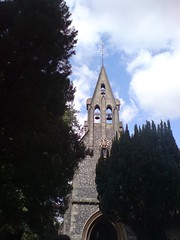 It’s amazing how quickly bad publicity spreads. Take for instance the story about the retirement party for Rev Ann Douglas as she departed as team rector of the team ministry in Woodley, and St John’s in particular. The basic facts of the story are that at the party, the Rev Jon Honour, a team vicar from Emmanuel Church, one of the other three churches in the team ministry turned up, and was punched several times by another party guest, described in most reports as a ‘disgruntled parishioner’.

I found out about it through the report in our local paper, which reported the fight and dropped hints about the background. It caught my attention partly because Rev Ann Douglas came to Woodley from my parents area, indeed Mum knew Ann well enough to be going to share a room with her at a conference at one point. Ann previously worked in South Oxhey, a large and deprived estate near Watford, where she was a popular priest, and some of the work she started, for example the ASCEND charity, continues today. Indeed her congregation there were sad to see her go.

Anyway, the story has well and truly snowballed. A number of the national papers picked it up including the Telegraph, the Times and the Sun (who have paired it with a story about a fight at a lesbian wedding). BBC News had the story too, and I’ve seen comment on the story from as far afield as Queensland in Australia. A search of Google reveals quite how far the story has spread.

I won’t much comment on the background, as although I have heard various things from people involved with their choir, and also know who the ‘disgruntled parishioner’ actually was, it’s something that the church, and the Woodley Team Ministry have to work out for themselves. However it is a salutary lesson for those of us involved in the management of our own churches about the importance of getting things right and not letting issues go unresolved. Certainly if I was on the PCC of a church where the congregation had dropped so significantly (150 to 30 according to the Wokingham Times) I’d certainly be asking serious questions about what and why it was happening.

Of course it is also good example for Church press officers of how much further bad publicity travels compared to bad. For example I doubt you would have heard about ASCEND had I not mentioned it, and most of the St James reports in the local paper go no further. But unfortunately Ann will probably be more associated with a punch-up at her leaving party, and the manner of her departure than the good work she did in Oxhey.