So after the stress of earlier in the week, we took a nice outing to the annual feast of Mac and iPod that is the Mac Expo, which thanks to our free tickets that I picked up two months ago only cost us the train fare (a lot less than the Â£24 it would have cost us both to go in normally). 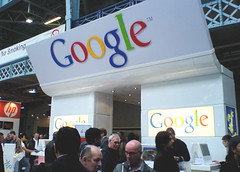 The exhibition was in the same place as last year, Kensington Olympia in London. There was an interesting selection of exhibitors with big stands from HP, Quark, Adobe and Wacom, a big stand from Google who were new for this year, but no presence this year from Microsoft. Apple again had the largest stand, but had noticeably changed the balance, with a lot fewer machines to play with in favour of a larger space for the theatre area where they gave regular demonstration throughout the day.

Podcasting seemed to be a definite theme with a number of people circulating round with digital recorders interviewing people on the stands, and Apple themselves majoring on the podcasting features in their software. They even had the Capital Radio Routemaster bus inside the hall which was being used to record regular podcasts throughout the event. 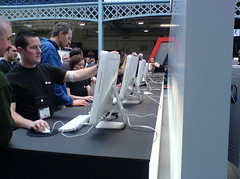 As in previous years the iMac was much in evidence, being the demonstration machine of choice across the show, with the majority being the latest Intel models, and only one of the original G3 and one G4 in evidence. Apple had their full current range, right up to the 24 inch monster – which on it’s own didn’t seem that big, until you compared it with the smaller models alongside. At the other end of the size spectrum was the MacBook which was being shown in both black and white guises, has a great screen, and is significantly smaller than I was expecting. Whilst it definitely seemed quite attractive, with the recent news that the Intel Core Duo 2 has gone into the MacBook Pro, I’m tempted to wait and see if the same processor makes it into the MacBooks too.

Anyway, despite some temptations, and the usual selection of show special offers, we managed to make it out without spending vast sums of money, needless to say there may come a Macbook or 24 inch iMac discussion at sometime soon… 😀