So after a pretty long wait, earlier this week our new phones were finally enabled by 3. It took their IT department several attempts to get it all working – including one slightly bizarre call where I was speaking to Simon on one mobile, whilst testing the other, and he was on the other end talking to one of the IT staff on another phone. Ultimately, they just came on. I had a MSN messenger message from Simon saying that the IT department had tried something else, but they thought it was unlikely to work – but it did.

Over the past few days I have been installing software onto the phone, and trying out various of the features of both the Nokia N73 and the service, including installing Opera Mini and Google Maps Mobile – both of which run well and look great on the phone. Also, in a move that probably will please Andy Tiller who spent a good deal of time trying to help me last year, I have got Shozu installed onto the new phone. Unlike with the K750 it went on without a hitch, and I was impressed with how easy it was to upload a picture. You can see my Shozu uploaded pictures on Flickr. (Nothing particularly awe inspiring as yet though…)

Although I said that I was going to leave setting up the Slingbox for our new house, since after the events of last weekend there will be no new house, I had to find a way to get the Slingbox somewhere suitable, but connected to the network. In terms of the best place, this had to be downstairs on top of our Sky+ box, as this isn’t in a cabinet, and so shouldn’t suffer from the heating problems I had when I previously tried out the box. However that is about as far from our internet connection as you can get in the house, and in a location that although a wireless link would probably work, the performance would be pretty poor. Running a normal network cable is not really an option either, so instead I turned to Power Line Communication, specifically a pair of HomePlug Turbo units from eConnect. 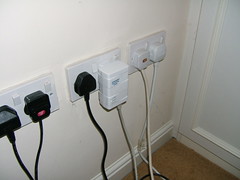 I have to say that these are probably the first device I’ve come across that really deserves the title plug-n-play, I literally plugged one unit into a socket upstairs, the other in downstairs, hooked the cable up to our router and the Slingbox popped up on the network, no configuration required at all. Speed wise it is not quite up to the speed of a direct network connecting, but faster that I could get with a wireless connection, running at between 65Mbps and 75Mbps. Certainly for anyone looking to extend their network in a similar way it seems by far the most straightforward way to do it, and certainly beats messing around with wireless settings.

Initially I have set the Slingbox up as before, using it’s inbuilt terrestrial digital decoder. Later I may well set it up to use the Sky+ box as well.

Having got that all set up, and confirmed it was working using the desktop version of the SlingPlayer, I then moved on to try the mobile version supplied as part of the X-Series.

The first thing it did was to download the latest version of the software itself, and then it was just a question of entering the identifier code for our particular Slingbox. Unfortunately this is the one really tedious aspect of the whole set-up process, as the identifier is a very long hexadecimal identifier, which is a bit of pain to key in using a mobile phone keypad. Thankfully it only needs to be entered once, as the player stores the Slingbox in it’s built in directory. 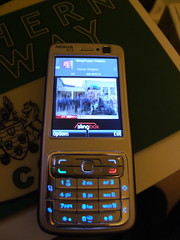 Unfortunately, the picture doesn’t do it justice, the picture quality is surprisingly good. The main issue, which could well be a routing issue between 3 and our current ISP, Zen Internet is that the data stream quite often stalls. Looking at the router, the data is still going out, it just seems to be getting delayed somewhere along the way to the phone. At some point I’ll try using a desktop version of the player on some other connections and check out the variations in quality and performance, and hopefully nail down where the stalling in the stream is coming from. It is not apparent when watching on the LAN, so I can only conclude that it is somewhere along the way across the Internet.

Anyway, despite the hiccups, it still is a really impressive feat. Whilst the mobile sized screen is not the best way to watch TV, the mere fact that it works as well as it does over a mobile connection is amazing.